Like “Daniel” from 2009 album Two Suns, “Laura” is a bit of a misdirection for Bat For Lashes’ Natasha Khan. The first is a reluctant pop song (Khan was so upset at succumbing to her producer’s insistence that “Daniel” be more accessible that she bit him in the studio), and the second is among the starkest sounding, most literal lyrical interpretations in her catalog. Khan spends most of her time closer to the fringes, preferring challenging arrangements filled with gurgling synth buzzes, programmed drum beats, and massaged cellos, and writing about about alter egos, wizards, and similarly mystical fare. “Laura’s” directness might very well have been predestined; the song seemed to flow from Khan like water. Co-written in just two hours with Justin Parker (who also co-penned Lana Del Rey’s inescapable “Video Games”) and recorded in one attempt, “Laura” is a essentially a demo take of vocals and piano that defies embellishment.

It’s choice as The Haunted Man’s first single affirms what the album cover already articulates — nakedness. In Khan’s case, it’s both physical, spiritual, and emotional.  She’s acknowledged a non-traditional, yet intense relationship with a higher power (much like one of her musical touchstones, Kate Bush) and described her childhood self as having “a fruitful… internal imaginary life.” That’s carried over into her adult life where Khan’s pursuit of a muse is relentless. While creating The Haunted Man, she attended children’s books illustration classes, took rigorous ballet lessons, and, having recently left a failed relationship, dutifully researched her family tree to see how many of her ancestors remained childless, presumably having failed as well. Khan, you could argue, bleeds her art.

All of these things imbue The Haunted Man with a pensiveness symbolic of the failure of men, the unrequited overprotectiveness of their female lovers, and the space between them that’s as “empty as a grave.” Lest you think Khan’s lost all hope, one of the album’s strongest moments occurs at the end of opener “Lillies” when she exclaims suddenly, reverently “Thank God, I’m alive!” Violins and gargantuan synths elucidate the darkness around her like thunderbolts as Khan extricates herself from the void, practically willing herself to live. 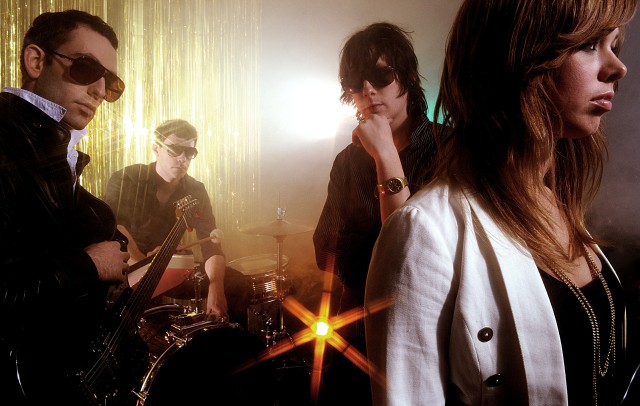 Johnny Jewel couldn’t care less what you think. The Portland, OR producer & multi-instrumentalist characterizes the sound of bands on his Italians Do It Better record label as “fully distilled. If you like that kind of thing, it sounds good. If it’s not your thing, it’s never gonna be your thing. My job is not to meet you halfway.” He should know since he’s at the helm of most of them, each project representing a different flavor of Jewel’s eclectic tastes — if Italo disco’s your thing, try Glass Candy; for Giorgio Moroder instrumental lovers, there’s Symmertry; indie rock fans, see Chromatics.

They all serve as vehicles for delivering the keyboard-centric soundscapes that play on the big screen in Jewel’s head. Chromatics’ 2007 Night Drive sounded like a movie soundtrack, Symmetry’s 2011 album was titled Themes for An Imaginary Film, and Chromatics’ “Tick of the Clock” finally did make it into Drive, last year’s visually riveting Gosling-noir thriller. The title track to Chromatics’ Kill For Love hones the formula to a razor’s edge, blending pop hooks, chilly synth splashes, and smooth as glass EQ into a nocturnal sound that feel like M83 drained of all hope, pageantry and bombast.

“I took a pill almost everynight… /I can’t remember if I liked what I said/ I kept a bottle by the foot of the bed/ I put a pillow right on top of my head” singer Ruth Radalet yawns over bubbling synth blips, Euro-disco strings, and shimmering New Ordery guitar riffs. Then she cranks up the thermostat: “But I would kill for love,” her husky tenor sounding half robotic and half 1-800 number operator, perfectly traversing the chasm between tranquilized faux-emotion and full aural arosal. Chromatics plays with temperatures like this — their songs warm and inviting, yet gorgeously icy. Their songs almost become images, albeit seen through smeared eyeliner and neon haze — lonely music for city streets abandoned at 4 a.m..

Despite its technical mastery, symphonic grandeur, and (let’s be honest) sheer weight, the essential question begged by Allelujah! Don’t Bend! Ascend! is do you have enough room in your life for another Goodspeed You! Black Emperor record? Frankly, that depends on your musical tastes, mood, and tolerance for repetition of form, however superlative it might be. The Canadian post-rock collective’s unexpected fourth album (their first in ten years) marks an undeniable return to the brilliance that turned cross-armed indie snobs into cult-like devotees of their 1997 debut F♯ A♯ ∞ and 2000’s critically acclaimed peak Lift Your Skinny Fists Like Antennas to Heaven.

It’s remarkable that Allelujah! Don’t Bend! Ascend!‘s depth, power, and sound is comparable to those Godspeed albums (“Mladic” and “We Drift Like Worried Fire” are actually concert warhorses the band has been playing as far back as 2003), but even more surprising is that a record of this stature is no longer the seismic event it once was. The sweeping instrumentals still serve as the band’s vessel through the troughs and swells of their signature sonic maelstrom, built from crashing guitars, thunderous bass, surging drum fills, and orchestral instruments like violins, marimbas and glockenspiels. But familiarity has softened some of Godspeed’s impact. It’s strange to think we’ve become used to this kind of heavenly, thrilling stuff — the sort of epic compositions that can move you to tears, smiles, and slack-jawed wonder.

Those unaffected by Godspeed’s previous work will likely remain so with Allelujah!, and long-time admirers who hoped for a sonic progression may be disappointed. But for most sane minds, the group’s reemergence remains enough. There’s something magnificent about Godspeed’s undiminished ability to deliver what no other band on earth can. That they have been able to sustain this level of excellence long past their window of influence is even more of a reminder how vital this band truly is. If you are up for the kind of emotional weightlifting that a Godspeed album demands, Allelujah! delivers in spades. You not only have room in your life for this record. You require it.

Godspeed You! Black Emperor – “We Drift Like Worried Fire” – mp3

“I heard he’s got a weak spot for you” are the first words whispered by UK artist Twigs on her self-titled debut EP. There’s more than just a hint of sexual heat in her conspiratorial coo, but delivered over crawling synths and echoed beats, the track’s more about her finding chinks in a lover’s emotional armor than romance. Twigs’ dark, finely textured electro pop is furtive ground to till both sorts of impulses. It’s filled with skittering, twitchy percussion, synths that morph from warm to ominous, and acres of empty space over which Twigs’ voice hangs like nighthawk, by turns elegant and predatory. She’s the latest promising electronic/R&B artist who, like Burial, the Weeknd and Rhye before her, benefits from the mystery afforded by anonymity — no one seems to know her background, her producer, or even her real name. “My body’s itching to press on the bruises you hide with a smile” is all she’ll offer on “Breathe,” whose video casts her uneasy sound in an even more sinister light  — it features Twigs taking apart a Mitsubishi Shogun truck with a hammer.

With the exception of Twigs’ voice, nearly every sound is digitally rendered, such that it’s hard to tell where the melody ends and percussion begins. The EP evokes the apocalyptic beauty of Maxinquaye-era Martina Topley-Bird and Fennesz-style glitch (“Breathe”) while occasionally descending into more pedestrian lounge chill ala Zero 7 (“Ache”). But it’s the particulars that separate this wheat from the rest of electronic music’s chaff — the unexpected chord changes on the chorus of “Breathe,” the liquified blues guitar licks in “Hide,” and the way the latter song unexpectedly slows to a creeping halt like a dying metronome. With just four tracks, Twigs EP feels like it’s over before it’s even begun, so you’re left wanting more mystery, more intricacies, and above all, more songs. There’s clearly something here, as tantalizingly little as there is to grasp on to.