15. D’Angelo and the Vanguard

Two weeks shy of Christmas Day, 2014, the ghost of neo-soul past miraculously reappeared, just when the world had given up on him — a 41-year old R&B savant defined as much by his absence as his commanding presence. Since masterwork Voodoo (2000), D’Angelo had cratered in a decade-long pit of fame-induced depression, drug and alcohol addiction, and a near-fatal car crash. “Would he ever return?” was now replaced by an even murkier question: “Would he still be the same?”

Black Messiah answered, unequivocally, yes. “If you’re wondering about the shape I’m in/ I hope it ain’t my abdomen that you’re referring to” D’Angelo cackled on “Back to the Future pt 1” with ?uestlove and crew, sounding looser and healthier than ever. The swampy, sexy funk of “Sugah Daddy” and flamenco-inflected polyrhythms on “Really Love” picked up right where Voodoo left off, but Black Messiah’s finest moments struck a more socially conscious tenor, channeling the impassioned outrage of There’s a Riot Goin’ On-era Sly & the Family Stone and the Reverend Al Green’s spiritual fervor.

“1000 Deaths” is a Hendrixian maelstrom of clipped feedback and slap bass, and psych-soul jewel “The Charade” swirls around the haunting chorus: “All we wanted was a chance to talk/ ‘Stead we only got outlined in chalk.” Both tracks were written before the controversial deaths of Eric Garner and Michael Brown Jr., making their inclusion on the album eerily prescient. If D’Angelo never releases another note of music (and he may not), what he has given us remains indispensible; Black Messiah seemed an eternity in the making but arrived in the nick of time.

See also: A Tribe Called Quest — “We The People…” 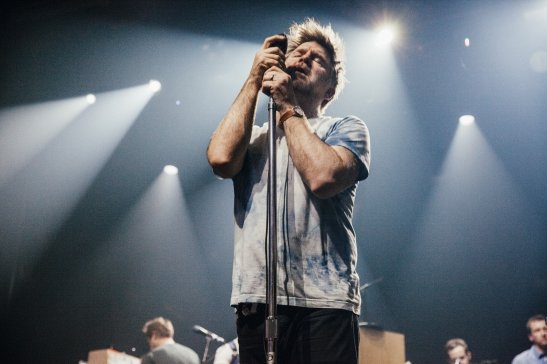 It was James Murphy’s late friend and idol, David Bowie, who ultimately rescued LCD Soundsystem. During the 2015 recording sessions for Blackstar, Bowie advised Murphy to reunite with bandmates even when the thought of it made him uncomfortable. “Good,” Bowie admonished, “If you’re not uncomfortable, you’re not doing anything.” Bowie would know; he was gone within a year, having recorded his final masterpiece privately under siege from terminal cancer.

Murphy’s dark, self-deprecating retort, American Dream, was influenced as much by Bowie’s death as the crumbling cultural institution its title references; it’s electo-punk anthems explore mortality, disillusionment, and how things fall apart with a solemnity absent LCD Soundsystem’s previous works. In retrospect, the seven-year hiatus between American Dream and would-be swan song This Is Happening seems less like retirement than necessary hibernation. This is Happening was Murphy, emotionally and physically exhausted from years of touring, going out at the top of his game; a juggernaut of Berlin Trilogy-era homages (“All I Want” and “I Can Change”) and concert war horses (“Dance Yrself Clean” and “Home”).

Murphy, a perpetual grizzled bear in a young man’s game, had already made a career out of looking over his shoulder for contemporaries who would render him obsolete — whether it be with better musicianship or superior vinyl collections. When faced with fears of the potential irrelevance of their comeback, Murphy shrugged: “We were always middle-aged.” For a band whose breakthrough (“Losing My Edge”) was predicated on the notion of just barely missing out on the zeitgest, LCD Soundsystem retiring at the peak of their powers then coming back before you knew it felt precisely on schedule.

Listen: “All I Want,” “Dance Yrself Clean” and “call the police”

As aural and visual provocateur, St. Vincent’s Annie Clark constructed a savvy persona — the riot grrrl next store with mommy issues. Misfit art rock powerhouses Strange Mercy (2011) and St. Vincent (2014) are the sounds of Depeche Mode, Talking Heads, and Big Black all dolled up in latex and leather, splattered with chunky guitar squawks, serrated synths, and robo-funk rhythms. Even when MASSSEDUCTION (2017) leaned further toward the pop end of the spectrum, it became her most libidinous and deviant work, plastered with earworm hooks and hot pink thigh gaps. Clark pulls off a miracle on the regular; she creates can’t-look-away stuff even when it’s the sort of thing we’ve all seen before.

St. Vincent creates insidious narratives with the hooks to match— a house wife buried alive by her husband and kids (“Cruel”), a luddite bedeviled by technology’s pervasiveness (“Digital Witness”), and a pop star who needs her daily fistful of meds just to think, sleep, and fuck (“Pills”), the latter’s melody burrowing deep in your cerebral cortex like a TV jingle for some dystopian pharmaceutical giant. In a decade where we lost both the Thin White Duke and the Purple One, St. Vincent comes as close to their cojoined essence as any artist we’ve seen. She’s a diminutive guitar God with the face of an angel, the golden intersection of slinky androgyny, high-concept panache, and bleeding-edge pop.

The National have always tapped into something magnificently depressing for their loyalists; it was only a matter of time before the rest of the planet caught on. If you were engaged in anything close to adulting in the year 2010, odds are you could relate to drowning in housing debt (“Bloodbuzz Ohio”), feeling routinely anxious and needing drugs to sort it out (“Afraid of Everyone”), or whispering miserable insecurities to your sleeping lover (“Conversation 16”). Was performing the same gloom-ridden mantra 105 times in a row for six hours straight a tad bombastic? Perhaps, but in extreme repitition lies monastic ephiphany, even relief. High Violet’s glum, drum-clobbered anthems served as not just an anesthetic but a glimmer of hope.

But as the decade wore on, something remarkable happened; the National’s reputation grew in stature even as their grandiosity waned. Sleep Well Beast’s eclectic experiments in electronica and I Am Easy To Find’s willingness to soften Berninger’s cannonball baritone with female vocals were acts of modesty that somehow felt daring. Headliners who still perform each night as if their lives depended on it, the National are one of the few bands in the last two decades to see themselves live long enough to not become what they abhor — complacent, irrelevant, vacant. We’ve witnessed Berninger’s deft sublimation of despondency over the years and learned small lessons. Aging is an act best done gracefully. Less is often far, far more.

Listen: “Lemonworld,” “This Is The Last Time,” and “The System Only Dreams in Total Darkness”

See also: Spoon — “Inside Out” 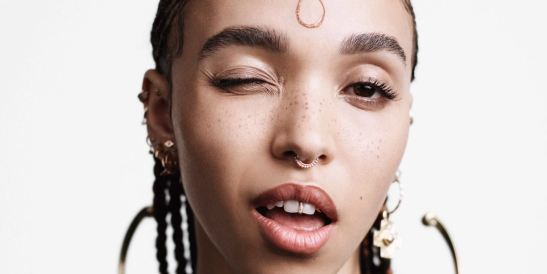 Tahliah Barnett’s exotically beautiful face adorns FKA twigs’ record covers but always distorted in some unnerving way — an elongated neck, bruised porcelain doll countenance, fingers and mouth melted together, zombified expression. In her post-apocalyptic mash-up of trip-hop, trap, and R&B, her sumptuous soprano wells with emotion within barrages of digitized noise — wailing car alarms (“Lights On”), ping-pong ball beats (“How’s That”), chords getting ripped in half (“In Time”). She dances to and fro along the rim of the Uncanny Valley; imagery accentuates the aspect of Bennet’s humanity that feels most unreal, but the songs push the boundary of inert, synthesized sound toward more soulful expression.

Twigs’ music videos are essential to decoding her myths. The essence of sonic deconstruction resides in the loving way she takes a hammer to an SUV. Getting orally fingered is a metaphor for lack of communication. Ejecting paint splashes and colored scarves from a birth canal is an analogy for creative inception. The images fascinate on a visceral level but evoke deeper themes — a desire for enhanced reality, our innate fear of death, and the crippling sense of emotional debilitation that lies in between. What you see, hear, and feel all become inseparable.

And forget counting electric sheep — androids have wet dreams listening to twigs (“Motherfucker, get your mouth open/ You know you’re mine” sounds twice as brazen when you know the recipient is Robert Pattinson). In the video for “Cellophane,” a near-nude Barnett defies gravity while pole-dancing, encounters a mechancial winged doppleganger, and finally plunges into purgatory. But underneath the physical contortion and CGI distorion is the real gut punch; a wobbly wisp of piano and a wounded lover’s question: “Didn’t I do it for you?” She has never looked more imposing yet sounded more vulnerable. Barnett armors herself in abstraction but triumphs when the facades get stripped away.

This entry was posted on December 22, 2019 by Jeff Goodwin in Best of and tagged D'Angelo, FKA twigs, LCD Soundsystem, st. vincent, The National.