“This Is America” – Childish Gambino

If you are someone who perceives pop music as a cultural barometer, you will never forget where you were the first time you saw Childish Gambino’s “This is America.” It’s not unlike the Challenger explosion or Kurt Cobain’s suicide or 9/11, those watershed moments forever seared on our collective consciousness because of their shock value and significance. Which is strange, because no one actually dies in “This is America.” But the inherent truths that lie within Donald Glover’s bleak, bulldozing artistic tour de force have ramifications that make it feel like a matter of life and death.

Within days of its release, countless think pieces had already unpacked the dense, chaotic visuals crafted by Glover and director Hiro Murai and decoded underlying themes of racial unrest, gun violence, sychophantism, and entertainment as distraction.  As is often the case in viral media culture, not much more remains to be said than what already has been. The video’s breakneck, superbly-choreographed sequence of shootings, riots, and random acts of violence are as unforgettable as the disturbing manner with which the 34-year old polymath jukes and jives through it all, equal parts assailant, diversionary tactic, and victim.  But what’s less discussed, and nearly as remarkable, is the way “This Is America’s” bi-polar sound mirrors Childish Gambino’s paradoxical vision. 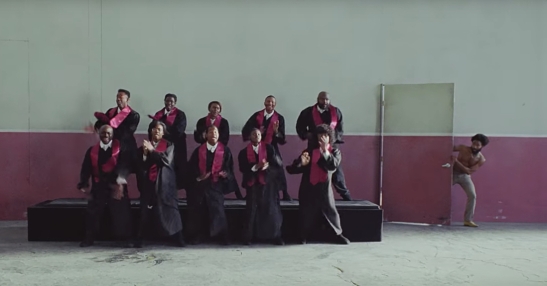 Two distinct musical themes inhabit the track; the first is a whimsical, guitar-plucked melody whose harmonized vocals set a celebratory soundtrack to the video’s most joyous moments — Gambino dancing like a freewheeling child, an African-American gospel choir exuberantly singing. The second is a menacing, industrial-tinged slab of trap bass that hits like a storm cloud chasing sun rays. It arrives at the precise moments Glover unexpectedly guns down his compatriots and bedlam ensues. Even without the accompanying images, the aural transition from levity to dread is instant and palpable.

What’s striking is how these motifs reconcile in the song’s final stanza. Both parts suddenly play at once. The drums lock into place, nylon strings float over the monstrous low end, and the choir voices intermingle with Gambino’s mangled yelps. It’s as unexpected as it is arresting — catchy like OutKast’s “Rosa Parks” and as ominous as Kanye’s “Black Skinhead.” The co-existence of the two sounds feels as inconceivable (and powerful) as the dichotomies Glover simultaneously acts out — of celebration and murder, joy and terror, faith and despair. Gambino maniacally gyrates to Afro-centric rhythms on top of a burnt-out car and his final James Brown-like imperative to “Get down!” is awful in its dualism. Dance, motherfucker, dance. And while you’re at it, avoid the hail of bullets above.

The haunting coda, little more than decaying beats and an eerie synth whine, plays harbinger to Glover’s solitary fate. Rapper Young Thug murmurs: “You’re just a black man in this world/ You’re just a bar code, ayy…. You just a big dawg, man/ I kenneled him in the back yard” as a terrified Glover (successful actor, comedian, writer, and singer) sprints in the darkness pursued by a faceless mob. His shirtless visage is transformed from celebrity sex appeal to an all too familiar narrative on the nightly news  — a young black man running for his life.

Irregardless of what you think about issues of racial injustice and gun control, “This Is America” strikes a universal nerve. If it’s hard to watch, that’s partially because its so intoxicating to hear. It’s a startling reminder that sometimes art gets exactly right what real-life trauma and all its unsightly aftermath (political spin, conjecture, and debates on policy) fails to evoke. Labyrinthine and abstract, “This is America” cuts straight through illusion — a nightmarish fantasy whose nascency demands your interpretation and remains impossible to ignore.

This entry was posted on May 11, 2018 by Jeff Goodwin in Reviews and tagged Childish Gambino, Donald Glover, This Is America.