“Enjoy the Girls” – Savages in Concert

It’s a rookie mistake. Twenty years of tinnitus-inducing shows hasn’t provided me enough of a reminder to bring ear plugs to Savages’ concert at legendary Cambridge, MA venue Downstairs at the Middle East. The all-female post punk quartet is making their first appearance in the Boston area as part of an American tour supporting their superb debut LP Silence Yourself.

Appropriately, one of the the album’s manifestos entreats listeners to tune out distractions “If the world would shut up, even for a little while, perhaps we would start hearing the distant rhythm of an angry young tune and recompose ourselves.” – just in time for Savages to blow it all apart. I literally can’t hear for shit anymore because of shows in venues like these – murky, hole-in-the-floor basements with Marshall amps stacked to the ceiling. It only takes a single song from the opening act Johnny Hostile to realize I’m in trouble…

Living up to his namesake, Hostile uncorks a bludgeoning aural assault on the crowd. The avant-garde producer/guitarist deals mostly in delay pedals, distortion and gobs of reverb, throwing up an impregnable wall of dub over prickly waves of Deerhunter-esque noise pop. The decibel level is borderline painful, sending many of us scurrying to the bar to purchase the little foam impediments (I score one of the last pairs). Hostile’s nebulous song structures and ingratiating habit of filling the quiet spaces with his tic-like yelp makes him little more than a serviceable opening act, though in reality he’s considerably more.

Hostile is Savages’ producer and for years has been romantically involved with lead singer Jehnny Beth (they released two albums under the moniker John & Jehn). He actually turned down Savages’ guitarist Gemma Thompson’s invitation to front the band, deferring to Beth instead. Although he’s been thoroughly eclipsed by his peers, Hostile remains a notable factor in their success.

Thus it feels odd, almost uncomfortable, when Hostile finishes his brief set and mumbles “Enjoy the girls,” before correcting himself by hurriedly adding “Enjoy Savages.” Given his standing, there’s a subtly possessive air to his first statement – it feels a bit like Charlie introducing his angels, who though they might have been the stars of the American TV show, still ultimately got pimped out week after week. It’s somehow depressing yet unsurprising that one of band’s staunchest supporters still falls prey to this type of subtle sexism. It’s the sort of oppression that Savages battles every day and ultimately feeds off of – from the soundmen who’ve walked out on their shows to the critics who’ve labelled them female clones of Joy Division. 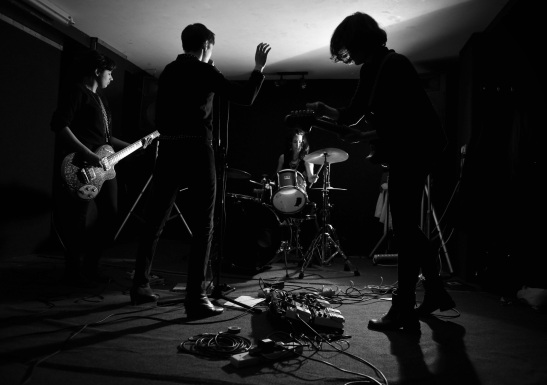 Savages spend their hour-long set demolishing the box that Hostile has inadvertently (one hopes) placed them in. They fearlessly open with two of their best new songs, “City’s Full” and “Shut Up,” tearing through them with the ravenous edge of a young band that knows its entire set list is going to pack a wallop. I can’t help but remove the ear plugs – Savages isn’t as deafening as Hostile, and besides, this is the sort of music you give up your ears for.

The acoustics are muddy from most of the basement’s vantage points, but the excellence of Savages’ songwriting powers through – the huge chord drop in “Strife”, the buoyant bass line in “Flying to Berlin,” and the pregnant, pin-drop silence between drum thwacks on “Waiting For a Sign.” The precision found in the songs’ studio recordings is absent, but it’s more than made up for by Savages’ searing live energy – their best moments on stage stay etched in your mind like a fly stuck in amber.

From start to finish, the black-clad quartet dominate the tiny venue, each one playing a distinct visual role in the unit – drummer Faye Milton is all hair, sweat and running mascara, pummeling her kit with tribal, almost-overhand strikes that exemplify Savages’ primal thump. Ayse Hassan’s bass playing serves almost as a melodic lead, her left hand scurrying over the huge guitar neck like a tarantula. She stands glued to one spot at the front of the stage, her imposing posture and smoldering stoicism as much a visual anchor for Savages as her dexterous bass lines drive songs like “Shut Up” and “Strife.” Hassan seems focused inward, looking everywhere but at the crowd; her counterpart Gemma Thompson gazes mostly downward, hunched over her axe like a wounded animal ripping off peals of feedback.

And then there’s Beth, who basically does the opposite – she never takes her eyes off the audience’s. It’s the sort of skill that only a public performer with unfazed intent and complete command of her message can pull off. There are no monitors, scribbled lyric sheets, or long stares into the back wall of the room to gather herself. She looks right into your eyes, voraciously, at all times. Her attractive, boyish looks do in fact recall the potency of a young Ian Curtis, but she’s far more present and confrontational. It’s mesmerizing, disarming, a little scary even.

As approachable and totally exposed as the band appears in this vipers’ den, they never feel anything less than completely in command. Savages create a delicious tension by fusing together supposedly unfeminine forms – post-punk, post-hardcore and metal – with striking feminine prowess. The “contradiction” is reflected all around the room. A mosh pit develops during “Give Me A Gun” and pair of skinny dudes nudge their way in, not to shove people around but to demonstrate fan-boy adoration – they wag fingers, pogo up and down, and perspire profusely.

Later on, a pixie-like wisp of a girl slips by me and disappears into the throng like vapor – she’s five feet nothing but has no fear of holding her own. A guy in a Refused shirt bounces around the perimeter, mouthing the repeated one-word climax to “Husbands,” Beth’s ode to feeling ill at ease with the suffocating burden of male attention. There’s something powerful being communicated here that’s clearly traversing gender. 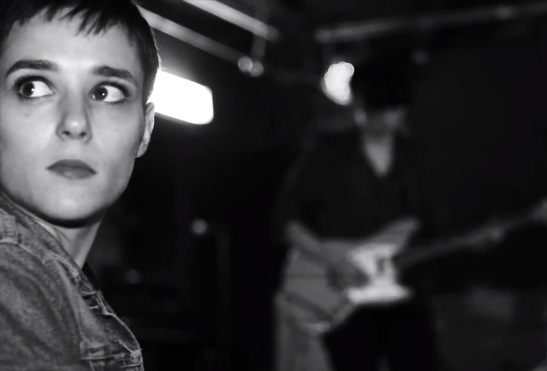 They conclude with the usual show-stopping rendition of “Fuckers” – a scathing anthem urging men and women alike not to “let the fuckers get you down” — but offer no encore. None is needed; the crowd is completely spent, over-satiated, load blown. The band has played their entire catalog, and everyone knows it. As people wearily disperse, my ears begin to ring, and I remember a story that my brother, a medical doctor, once told me.

Scientific research actually revealed that the first evidence of hearing loss in men most often occurs when the hairs in a particular region of the ear canal become fatigued from excessive vibration. The hairs in that region just so happen to vibrate at a frequency that corresponds to the female voice. We both laughed. Maybe selective hearing wasn’t a fictitious condition after all; we could argue that our ears were literally getting worn out by our spouses’ voices.

I’ve tried to pass this line of pure bullshit off as an excuse why I can’t hear so well anymore, but it never seems to fly with my wife. The real reason is a show like Savages, where I take out the ear plugs and submit myself to Beth’s missives on husbands, urban strife, and the perils of a young woman ill at ease with her surroundings but who won’t let it stop her from owning them. It’s the sort of thing worth experiencing, even at the cost of my own senses. Flattened, educated, and now recomposed, I finally know what it means to enjoy the girls.