The Velvet Underground’s incendiary proto-punk seemed so outside the plane of music’s reality in 1968 that Lou Reed’s throwaway line “You don’t look like Martha and the Vandellas” from White Light/White Heat outtake “Temptation Inside Your Heart” snaps you back into the cultural temperature of that time and place. The Velvet’s New York City-hardened flavor of west-coast pop innocence sounded shockingly abrasive — like surfer rock riffs strung out on smack.  America’s rallying cry of teenage rebellion “Well, she got her daddy’s car/ And she cruised through the hamburger stand now” had since turned into “I’m waiting for my man/ Twenty six dollars in my hand.”  White Light/White Heat was a new, disquieting sound for a new age of social, political, and sexual discontent. Forty five years later, it remains the apex of the Velvet’s career, more dissonant and demented than their debut The Velvet Underground & Nico yet more incisive than the works of the Cale-less line-up that followed. 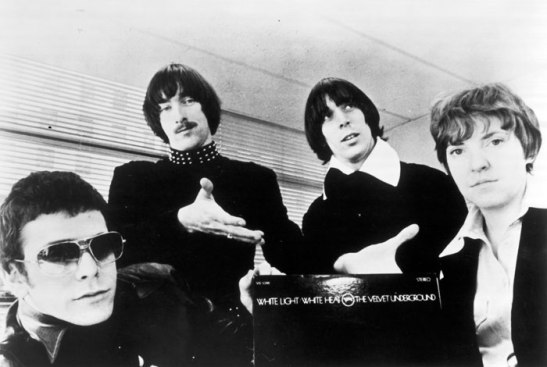 Indeed, this remastered, three-disc reissue confirms what most have known for a while — White Light/White Heat was John Cale’s album. His twisted, sex-and-violence narratives on “The Gift” and “Lady Godiva’s Operation” cast a spotlight on the counterculture’s seedy underbelly years before America was comfortable acknowledging its existence. Recorded in one take in September 1967, Cale’s explosive, disfigured organ work on “Sister Ray” played evil twin to Ray Manzarek’s keys on “Light My Fire”  — a darker, more sinister soundtrack to the Summer of Love. It’s one of rock’s greatest riffs, the kind that will carry a song for 17 deranged minutes, drive a recording engineer out of his own studio (“I don’t have to listen to this…. Come and get me when you’re done.”) and breathe life into the tortured careers of the Modern Lovers, Suicide, and Joy Division.

The delicate “Here She Comes Now” confirms that the Velvets could write a perfect song when they wanted to — it’s just that they preferred not to. White Light/White Heat didn’t sell for shit when it was first released, but it remains a universal touchstone in punk, indie, and experimental rock history. Reed called the album “the Statue of Liberty of Punk…no other group can touch what that is,” but that’s not entirely true.  Artists have since attained its aural savagery, its sense of deviance, its ecstatic rendering of the damaged urban psyche, but what cannot be duplicated is White Light/White Heat’s utter sense of surprise. Until the Velvets, no one ever spoke/sang in a deadpan style like Lou Reed, no one talked about heroin-ridden transvestites sucking on their cocks, no one assaulted the ears with unholy barrages of Fender Stratocaster feedback and called it “music.” Reed’s death this year at age 71 underscores just how astonishingly well White Light/White Heat has aged — it’s an album so ahead of its time that it sounds brand spanking new today.

If there’s a question whether the deluxe reissue is designed to do more than rack up perfect 10’s and boost VU catalog sales, the answer rests in White Light/White Heat‘s additional material and packaging. Most of the outtakes on disc one are available on VU and other compilations, but collected together they offer a true representation of the band’s unearthly powers from this period. (In particular, the instrumental version of “Guess I’m Falling In Love” is an absolute bulldozer.)  Disc two’s mono version of White Light/White Heat has a certain queer charm to it — think a hurricane broadcast over a public address system. It’s like witnessing the technicolor Velvets rendered in black and white, their fascinating oddities and savage thrash buried under the gunky layers of forgotten history.

Disc three is the true collector’s treasure, containing a concert performance from New York City’s The Gymnasium that was previously only available as a bootleg.  “I’m Not A Young Man Anymore” spits forth a spiky, harrowing tangle of Sterling Morrison’s and Reed’s guitar lines as the latter professes the song’s title with alarming fervor. Drummer Mo Tucker and Cale lurch through the band’s first public performance of “Sister Ray” — it’s muddy, chugging and unstoppable, as if stoned on booze and barbiturates.

Musically, the Velvet Underground’s ability to manipulate pop forms to the brink of total collapse supplied a crucial juncture between the 60’s melodic innocence and the experiments in drone and distortion that would evolve in the decades to come. Without them, there’s no Sonic Youth, no Pixies, no Pavement. Since 1968, this thing called “rock music” has grown bolder, more complicated, and exceedingly more difficult to wrap your arms around. But rarely has it ever been as uncannily prescient (and surreal) as the snapshot in time that was White Light/White Heat. The Velvets quite literally ushered in a new era — one where you could mow the Edelson’s lawn for a dollar fifty, ship yourself in a box to your unfaithful college sweetheart, and wait to get stabbed with sheet metal cutters. Music’s never been the same since.