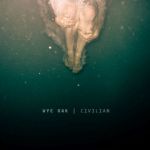 They can be found in St. Paul’s Cathedral in London, New York City’s Grand Central Terminal, and St. Peter’s Basilica in the Vatican City — those high-vaulted, elliptical chambers whose rare acoustic properties allow you to hear the whispered conversations of those on the other side of the room as if they were right next to you. If you’ve ever stood inside one, you’ll know what Civilian feels like. On Wye Oak’s third full album, and first since 2010’s remarkable step-forward My Neighbor/My Creator EP, the Baltimore duo create a sort of virtual whispering gallery, meticulously sculpting sounds right around your ear while imparting you with a sensation of magnitude and volume. There’s always been a sense of massive space surrounding Wye Oak’s songs (as singer/guitarist Jenn Wasner pleasantly asserts, they relish being able to “dominate a room” in concert), and many newbies to the band are amazed that two people can make so much clamor. But for all their loudness and intensity, Wye Oak ultimately succeed by making you feel as though you’re privy to something uniquely personal; Civilian is a big, lush-sounding album that brings you in close.

Jenn Wasner’s beautifully understated vocals and exceptional guitar work have always been at the heart of Wye Oak, and it’s no different here. Her voice reminds you of a few different singers — the Pixies’ Kim Deal on high notes, Beth Orton when raspy and vulnerable, and Canadian alt-country singer Kathleen Edwards in timbre. It’s a potent mixture to which Wasner adds her own sly phrasing. Her enunciation is often loose and gorgeously lazy, lending the words an esoteric, instrumental quality that feels like another sound in Wye Oak’s arsenal. Wasner has said in interviews that her favorite singer is country legend Patsy Cline, and while she doesn’t have the same classically-trained pipes, and you can feel her attempt to reach into the depths where Cline went, places where the sound of a voice communicates as much emotion as the lyrics.

As a guitarist, Wasner is perpetually undervalued, but after Civilian this should change. She’s the driving force behind every song and, like most great standalone guitarists, shifts between rhythm and lead so elusively that you barely notice she’s doing it. On the first three tracks, Wasner lays out her extensive array of fretwork skills while creating remarkably different moods — the warm atmospherics of “Two Small Deaths,” the jangling melodic march of “The Alter” and the propulsive, head-bobbing crunch of “Holy Holy.” After a brief pause in the middle of “Dogs Eyes,” your ears are suddenly assaulted with a Crazy Horse-like bark of feedback. In the four-minute span of Civilian’s title track, Wasner morphs from delicate finger picking to reverb-laden strumming to jaw-dropping speaker shredding, making the transitions between each step seem natural and effortless.

The second even more underrated half of Wye Oak is drummer and keyboardist Andy Stack. Stack has taken the title of multi-instrumentalist to another level, learning how to drum with his feet and right hand while playing keyboards with his left, all the while singing back-up vocals. It’s an astonishing feat, especially when seen live. Since day one, Wye Oak’s shows have been built upon a quiet-then-loud aesthetic, and Stack’s ability to sound like a full band behind Wasner powers this dynamic. But on Civilian he brings new found nuance to bear; whether playing percussively or serving as a melodic counterpoint to Wasner, Stack adds a deeper palette of sonic shadings to Wye Oak’s usual lights and darks.

The couple’s partnership was rumored to have been romantic at one time (though the band insists they’re just good friends); either way, its clear that relationships are a deep well for Wasner to draw upon in her songwriting. On “Civilian,” Wasner hints at a partner’s acceptance with a disarming, child-like truthfulness: “I still keep my baby teeth in the bedside table with my jewelry/ You still sleep in the bed with me, my jewelry, and my baby teeth.” She tackles her own emotional neediness candidly: “I am nothing without a man/ I know my faults/ But I can’t hide them.” On bare-bones closer “Doubt,” Wasner admits, “If you should doubt my heart/ Remember this/ That I would lie to you/ If I believed it was right to do.” It’s like she wants to hold this person close, but can’t help but keep him at arm’s length. Elsewhere, Wasner’s already hard-to-discern lyrics are often buried in a thick coat of reverb and guitar feedback, imparting her vocals with a languid, almost dream-like secrecy. All of this works to make Civilian sound accessible yet feel very private, almost like you’re peering in on a lovers’ intimacy through a frosted, opaque window.

Wye Oak’s gorgeously rich sound, the airy allure of Wasner’s voice, and the fact that the duo hail from Baltimore result in frequently drawn comparisons to another indie band Beach House, but Wye Oak’s roots draw more deeply from country and rock than dream pop. Their straightforward American guitar sound puts them square in the middle of the indie rock road, a throwback to 90’s traditionalists Yo La Tengo (another great creative force built on the relationship of two musicians), with a touch of Uncle Tupelo’s No Depression twang and My Bloody Valentine’s shoegaze onslaught. It’s hard to picture all these influences working together, but on the “The Alter,” they do; the opening alt-country melody segues beautifully into a chugging organ and guitar thumper that concludes with Wasner doing her best Bilinda Butcher impersonation as the track detonates in a heavenly squall of fuzz and feedback.

On the penultimate track “We Were Wealth,” Wye Oak delivers perhaps Civilian’s finest moment. In the last two minutes the song shifts into a descending chord progression, first delicately then forcefully, as golden piano keys, Stack’s wall of percussion, and Wasner’s vocals gather into a grand, harmonic tidal wave that washes over you. These are big chords, and whatever this song means to you emotionally, it all comes welling up. “We Were Wealth” is the summation of everything on Civilian — deft aural touches, the full brunt of Wasner’s ragged guitar peals, and pure melodic glory. 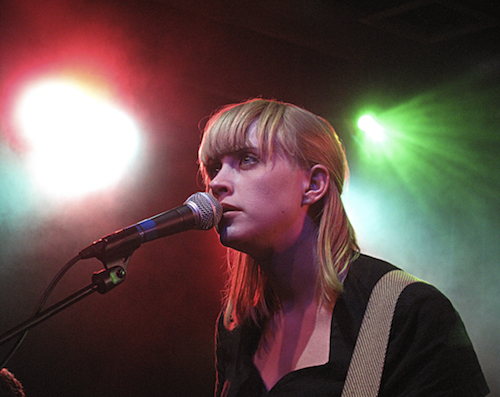 I still recall the hearing Wye Oak for the first time as part of the A.V. Onion Club’s Undercover series, when they played the Kinks’ “Strangers” with this same sort of smoldering, full-blooded fervor; Wasner’s aching guitar solo sent chills up my spine.  You could tell they were special even though they were playing someone else’s tune.  I distinctly remember thinking that if any of Wye Oak’s original songs were as well-written as Dave Davies’, this could be a very special band; on Civilian, it’s come true. They’ve learned how to smooth the edges between the hard and the soft, to not just rely on killer chops but also refined songwriting. The sense of care and craft that’s gone into this album is immediately evident. Like plush, sturdy, high-backed chairs, the songs support you while letting you settle into their luxurious depths.

It’s fitting then that before a single note is played, Civilian begins with sound of dozens of people talking at once, like ambient crowd noise in a great domed room. Slowly, Stack’s keyboards and gentle tapping come into focus, and Wasner’ guitar and beguiling vocals pour forth into your ears with a laconic, drowsy beauty, like poetry murmured by a mouth that’s drunk too much wine. In just that moment, that first high-backed chair is moved from the center of the chamber to the perimeter, where the other voices fade out and Wye Oak’s whispers become clear as day, quietly blowing you away.