Several years ago, an ambitious Amazon reviewer published a ten-step checklist, a sort of “indie music for dummies” guide to albums you should own and listen to in precise order to achieve total hipsterdom.  I think Neutral Milk Hotel and Explosions in the Sky were at Stage 10: Indie Nirvana (or something like that). But guess which band was step one — the perfect gateway drug for pop music fans to start a nasty indie rock habit? Yep, Coldplay.

Indeed, after their excellent, tastefully modest debut Parachutes and multi-platinum follow-up A Rush of Blood to the Head (an apt metaphor for that album’s augmentation of everything), Coldplay had the best of both worlds — gobs of street cred for their guitar-focused, almost-indie sound and Chris Martin’s ability to craft melodies that had massive crossover pop appeal.  By 2002, U2 and Radiohead were either incapable of or unwilling to write hit ballads like “The Scientist” and stadium anthems like “Clocks,” but Coldplay did, gladly graduating from the little band that could to World’s Biggest Rock Band. Just days before A Rush of Blood to the Head was released, I saw Coldplay perform at the 850-person occupancy Paradise Rock Club in Boston for $12, and by the clamorous climax of opener “Politik,” you could see that a spastic, headbanging Chris Martin was not only coming out of his shell and from behind his piano — he was a budding superstar waiting to be born.

But its nearly impossible for musicians to remain in such a enviable position for very long — being both hip, cultural taste makers and the guys who wrote that “Viva La Vida” song that even your mom knows. In the decade since, Coldplay has tried desperately to play both sides of the field, striving for bigger and better pop hits while riding the coattails of indie rock’s surging popularity.  It turns out you have to choose one way or the other, and even deciding not to choose is a choice. On their fifth album, oddly-conceived Mylo Xyloto, Coldplay have settled into the worst of both worlds, a lazy sort of nether region where their recycled, neutered rock riffs have grown annoyingly predictable and their glossy, pop inclinations have turned awkward and, worst of all, bland.

The album’s first half is full of arena rockers, with catchy but polished-till-it-bleeds “Hurts Like Heaven,” pop-friendly “Paradise,” “Charlie Brown” and monster first single “Every Teardrop is a Waterfall.”  Martin relies on his high, unmistakable tenor to convey his emotions to the masses, which is fine since storytelling has never been his strong point (“Our lyrics are a bit shit” he recently admitted to NME). But on Mylo Xyloto, the banality goes too far; more than half the songs have choruses of ”oh ohh ohhhhs” or “ah ahh ahhhhs” which, coupled with sawed down melodic edges, pitch perfect synths, and club beats makes Coldplay sound precariously close to a boy band. I don’t know if I will never be able to listen to “Paradise” without thinking of NKOTB’s “Hanging Tough” — a chorus of Chris Martins, all well-groomed and outlandishly dressed (What the hell is with that clownish Sgt Peppers’ jacket? It has to go) dancing in my head.

Opening with “I turn the music up, I got my records on,” “Every Teardrop is a Waterfall” is a fist-pumping rocker exhorting the pleasures of listening to… well, fist pumping rockers — a song that’s basically about itself. And that’s cool, I get that Coldplay is having a bit of mindless fun. Pop and hip-hop stars do this sort of self-referential thing all the time, with dance songs about dancing and rap songs about how good of a rapper you are. But for a rock band with the platform and chops of Coldplay, this sort of lyrical shallowness feels more than a little disingenuous.

As far as triteness goes, analogies don’t get much worse than “I’d rather be a comma than a full stop.” Why not a question mark while you’re at it, Chris… as in what the fuck were you thinking when you wrote that?  I can imagine a few more insightful and provocative things for a lead singer to compare himself to than punctuation. And does anyone know what “every tear drop is a waterfall” actually means? Is Martin feeling indescribably sad about his record collection or angling for a spot in a Visine commercial? Sure, he could have chosen a worse bodily fluid to reference (Oasis manager Alan McGee did famously call Coldplay songs “bedwetter’s music”), but these lyrics mean almost nothing, which is a shame given that millions will be shouting them over the album’s greatest hook.

The record’s second half is just as clean-sounding and loud; unfortunately, the songs aren’t as good. There’s nothing really wrong with softly-strummed ballad “U.F.O.” or off-kilter rocker “Major Minor” — they simply sound like Martin doing obligatory remakes of “Green Eyes” and “A Whisper” with less memorable melodies and glossier production. The Rhianna duet “Princess of China” is the real surprise here, and definitely not in a good way. Paired up with the R&B goddess’s sexy cyborg growls and the clubland synths, Martin sounds so inexplicably out of place that it’s almost unbearable. What’s even more disturbing is that Martin has called the song is his “favourite bit” of Mylo Xyloto. To get through the track for this review, I had to practically strap myself down, Lon Chaney-style — it’s one for which skip buttons were made.

Coldplay has always had populist leanings, but on Mylo Xyloto they’ve significantly lowered the age limit to entry, for better or worse. It’s draped in radio-friendly effects, features that Rihanna track, and has lots of lyrics about youth gone wild. When Martin shouts: “All the kids they dance/ All the kids, all night” and “All the boys/ All the girls/ All the madness that occurs/ We’ll run riot/ We’ll be glowing in the dark,” I can practically picture thousands of teenagers at Wembley, singing along with raised cell phones and crying “Ooooooh, cool! We really are glowing in the dark!” But if the kids of the world are truly looking to riot in 2011, they may want to consider the Arab Spring, Greek protests, or Occupy Wall Street movement before settling on a Coldplay concert. 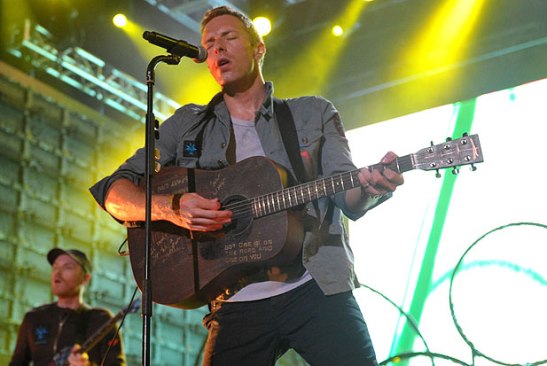 And, yeah, The Joshua Tree must be on heavy rotation in the studio because the Coldplay-sounding-like-U2 thing isn’t getting any subtler. Guitarist Jonny Buckland rips the Edge off not once but twice in “Major Minor” (see both “In God’s Country” and “Bullet the Blue Sky”), and “Every Tear Drop is a Waterfall” is basically “Where the Streets Have No Name” without Bono’s religious fervor. The song highlights what’s so maddeningly frustrating about Coldplay — they can follow up one of their worst moments (Martin unbearably yelping “it was a wa ahh ahhh ahhhh aterfall!!!!) with one of their best (the thunderous bass line that, while stolen right from the play book of U2’s Adam Clayton, is still satisfyingly climactic.) It’s like they’re trying to convince you that their shit sandwich tastes good by sprucing it up with a splash of hot sauce. It’s hard to enjoy listening to this and feel good about yourself afterwards.

Even for indie music fans like myself who admittedly have a soft spot for rock bands that can write a catchy hook, watching Coldplay descend this deeply into a vapid pop abyss is painful.  So after one last spin of Mylo Xyloto I’ve decided to quit Coldplay, the so-called gateway drug to indie rock, because these four London lads chose to lead me down a completely different slippery slope (i.e. the American Idol route) than the one I expected. I’m sorry Coldplay, but those auto-tuned guitars and sugary keyboards are giving me such a hangover that, withdrawal be damned, I’m putting you down. It’s over. Cold turkey. Full stop.

“Every Teardrop is a Waterfall” – Coldplay – mp3

This entry was posted on October 24, 2011 by Jeff Goodwin in Coldplay, Reviews and tagged coldplay, every teardrop is a waterfall, mylo xyloto, paradise, rihanna.