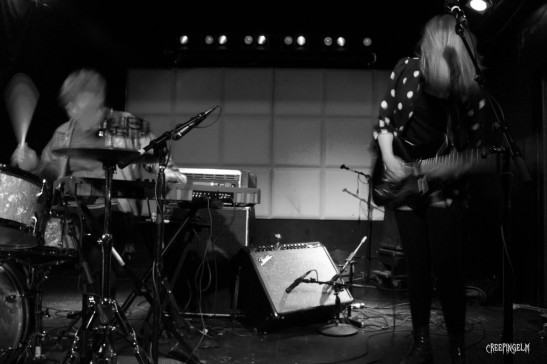 Sheer volume and raucous energy are two qualities most often cited when admiring accomplished rock duos like the White Stripes, the Black Keys, and No Age — the old “how can two people possibly make that much noise?” argument. And while I’d wager Wye Oak’s singer/guitarist Jenn Wasner could give Jack White a run for his money in a shredding competition, she and drummer/keyboardist Andy Stack succeed for very different reasons on their second full album Civilian. Listening to the luxurious aural details on “Two Small Deaths” or the layered climax of “We Were Wealth,” it’s immediately apparent that Wye Oak’s sound has a richness, a fullness, that any band, whether two person or five, would covet.

Largely, it’s a testament to their remarkable ability to do several things at once, whether it’s Stack drumming with one hand while playing keyboards with the other, or Wasner interweaving contradictory states of uncertainty, yearning, and resilience into compositions that simultaneously project power and vulnerability. “I wanted to give you everything/But I still stand in awe of superficial things” she reluctantly admits over the title track’s ragged country thump, words whose honesty and breathy weight feel excavated from some deep, gritty emotional center.  The exceptional quality of Wasner’s songwriting along with the genuine, sleepy-eyed coolness she projects just before bludgeoning your ears with the overdrive pedal on her Reverend Jetstream will have many late-to-the-game critics predicting greatness for the next album from this criminally overlooked Baltimore duo. But don’t miss Civilian; that future is now.

It’s been four years plus since Burial released his seminal Untrue, an ominous, light-absorbing collage of clattering 2-step, cavernous subway tunnel echo, and obscure pitch-fucked R&B samples, perhaps the most original and compelling sonic manifestation of urban despair this young century has yet to offer. It’s the kind of music for creeping along in alleyways, shuffling past rain-filled gutters, and peering into (but staying just out of) shelter’s warm light. Burial (a.k.a. Will Bevan) got it so right, so quickly that he’s been understandably reluctant to venture back out into the fray, preferring anonymity to fame’s bright bulbs.

But like a tea kettle letting off steam, Burial resurfaced in trickles and bubbles in 2011; first the out-of-nowhere “Street Halo” single, then Four Tet/Thom Yorke collaboration “Ego” and b-side “Mirror,” then finally a transcendent remix of Massive Attack’s “Paradise Circus.” Burial’s willingness to tweak his vinyl crackles and smeared sound style by collaborating with other artists is surprising but understandable — he possesses one of the most recognizable sonic milieus of the last decade but is confronted with the Scylla and Charybdis dilemma of either growing stale or fucking with perfection.

Damned if you do and damned if you don’t, Burial somehow chooses neither, instead lurking in a nether region of remixes, collabs, limited vinyl releases and internet rips, eerily similar to the tremulous, nocturnal soundscapes he creates. Burial recording tracks with heavyweights like Four Tet and Thom Yorke isn’t just a music fan’s wet dream, it’s a confirmation why pretty girls always seems to hang out with hot friends and why the strongest wolves travel in packs — proficiency attracts its equals, and all three of these guys are at the top of their game.

Let England Shake is alt-rock elder stateswoman PJ Harvey’s richly crafted chronicle of her beloved home country and the hardships of war it has endured.  There are striking lyrical depictions of both the bravery found in battle (“To you England, I cling/Undaunted, never failing) and the senselessness (“I’ve seen soldiers fall like lumps of meat” is an unforgettable line.)  Harvey’s tenth album (and her second to win the UK’s prestigious Mercury Prize) is stunningly somber, grand in execution, and almost too arduous to consume in one sitting if it weren’t for the bright chords and catchy melodies that she employs.

There is an old phrase in the Muslim faith that a man’s fate is written on his forehead, and in Harvey’s impressionistic ode to the war-ravaged Middle East, that fate is doom. “Written on the Forehead” describes the apocalyptic landscape of modern day Iraq. As society crumbles around the survivors, some spend their last living moments pursuing pleasures of the flesh while others attempt to flee through a river of sewage. Trenches of burning oil glow amongst the orange and tangerine trees, an exotic, surreal backdrop to Harvey’s gentle cries.  It’s visually evocative, gorgeous-sounding, and haunting. Intertwined with the melody is a swaying sample from Niney the Observer’s reggae gem “Blood & Fire,” itself a song about final judgment. It’s a wonderfully strange pairing of darkness and light, much like Harvey herself — the still strangely mesmerizing chanteuse who finds beauty in the end of days.

“Written on the Forehead” – mp3

See also “The Words That Maketh Murder” and “On Battleship Hill”

7) The Weeknd
“The Morning” – House of Balloons 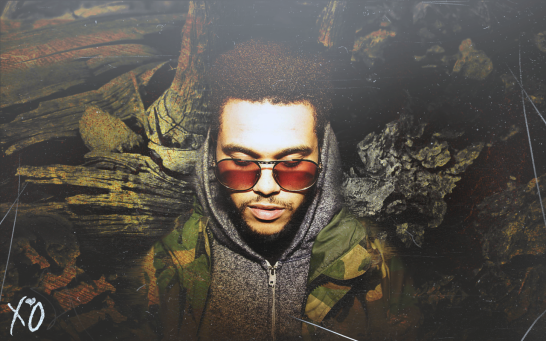 In the year when a genre called “hipster R&B” threatened to become what one blogger called the Next Thing White People Like, no artist was more accountable than Toronto-based outfit the Weeknd. After a few tracks were mysteriously uploaded to YouTube and Drake gave the project props on Twitter, details on the Weeknd trickled in; it was fronted by still unknown 21-year old singer Abel Tesfaye, produced by Doc McKinney and Illangelo, and heavily shrouded in secrecy. Without any interviews, photos, or press material to speak of, no one knew what made the Weeknd tick but when they finally dropped mixtape House of Balloons as a free download, it didn’t matter.  Nine silky, sinister jams painted a compellingly lurid picture of the underground after party scene filled with “baseheads and high women,” an entire sub-culture of vampiric socialites soaked in intoxication and fornication.

Months later, the Weeknd released another mixtape Thursday, a less hooky but still gripping exercise in sensual decadence. Both albums are case studies in utilizing sound to build mood, with hypnotically spacious productions that leverage druggy synths, bluesy guitars, and 808’s to craft a milieu of darkly romantic menace. But what truly mesmerizes is the unflinching honesty with which Tesfaye loves and loathes his own moral decay. “Bring the drugs, baby, I can bring my pain” he instructs a stripper one night, then the next morning tells another conquest:  “All that money/The money is the motive/Girl, put in work.” For someone who can make a room sweaty, Tesfaye sure is one cold son of a bitch — not since Prince’s early days has coercion sounded so inviting.

See also “What You Need,” “House of Balloons/Glass Table Girls” and “Heaven or Las Vegas”

“What’s my name, what’s my station?/Oh, just tell me what I should do” cries Robin Pecknold on the title track to Fleet Foxes’ tumultuous second album, and it feels like a crisis of faith. But amidst a crippling bout of writer’s block, a crumbling personal relationship, and the terrible weight of expectations brought on by his band’s superb debut album, it would seem only natural that Pecknold give up the reins and seek guidance from a higher power: “I don’t know who to believe/I’ll get back to you someday/Soon, you will see.” Whether Pecknold was referring to God, the Universe, or his lost muse, one thing is clear — the crucible which Fleet Foxes endured while making Helplessness Blues has produced one of year’s most assured and remarkable albums.

Besides the band’s gorgeous campfire harmonies and daring instrumentation (a clarinet, lap steel guitar, music box, and vibraphone are all heard here), Helplessness Blues benefits in no small part from Pecknold’s newly-found lyrical deftness. Whether it’s the magician from “Sim Sala Bim” “lighting a match on the suitcase’s latch in the fading of night” or the philosopher of “Blue Spotted Tail” gazing inquisitively at stars hung like lights across the night sky, you can practically picture these images. Most moving of all is when Pecknold finally finds peace on majestic closer “Grown Ocean.” Over galloping tympani and a choir of angelic voices, he recounts the reverie that lifted his misery: “In that dream I could hardly contain it/All my life I will wait to attain it/There, there, there” Is he referring to heaven itself? It’s hard to believe otherwise when seconds later the flutes trill and Pecknold exclaims an otherworldly “Oh Ohhhhhh,” blissfully taking you there.