Pop Music’s Unyouth Movement: Why We Want To Remain 25 Forever

In a rare moment of candidness during last Sunday’s 2013 Grammy awards, pop music finally showed its age. An incredulous Nate Ruess, singer from the indie pop band Fun, had just taken the stage to accept the Best Pop Song award for the tune he had penned, the inane yet inescapable “We Are Young.” The diminutive, almost elf-like Ruess has been in the music business for over a decade, originally fronting indie rock band The Format from 2001 to 2008.  He’s the kind of guy you’re happy to see win; he’s certainly had his share of failures. The Format’s debut album Interventions + Lullabies had the kind of major key melodies, strong vocals, and catchy choruses that seemed destined to make it a crossover hit, but it never came close to panning out, languishing in bargain bin purgatory instead. I think I’m one of the six of people who actually bought that record.

What’s fascinating is why Fun succeeded where The Format did not.  Maybe alternative radio wasn’t ready for something so pop-sounding in 2003. But I think the reason is something a little sneakier. For all their polish and sweet harmonies, the Format professed serious worries about adult problems: “The thought of death just scares me to death” Ruess sang on “Try Try Try.” But a decade later, with appropriately named Fun (no confusing his intentions there), Ruess adopts a more light-hearted tone: “Tonight, we are young/ Let’s set the world on fire/ We can burn brighter/ Than the sun.” This song and it’s cousins “Some Nights” and “Carry On” have become self-appointed anthems of happy-go-lucky high schoolers and beer bong hitting college kids everywhere. They carry the distinct aura of youth’s promise, endless possibilities, and immortality. It doesn’t hurt that Ruess sounds like he’s about 19.

Upon accepting the award, the thirty-one year old lead singer began his speech with a wry observation: “I don’t know what I was thinking when I wrote the chorus to this song. This is in HD, everyone can see our faces, and we are not very young.” It got a lot of laughs. But Ruess is getting the last laugh because he, along with several other musicians, have discovered a little secret in today’s entertainment business. Pop music may be for the young, but these days you don’t have to be young to make it.

Historically, artists in their teens and twenties have always been the epicenter of popular music — from the Beach Boys and the Monkees, to Little Stevie Wonder and Michael Jackson, to Debbie Gibson and NKOTB, to Britney Spears and N’Sync. When a pop star like Wonder or MJ experienced success into their 30’s, it was typically as a result of some “artistic maturation” or “creative evolution” that they underwent. Artists who couldn’t make that leap typically faded into obscurity (or Celebrity Apprentice and 20 year reunion tours). It’s almost like every musician gets a memo before their 30th birthday that read:  “Sorry, your guest pass to Pop World has expired. It’s time to grow up now.”

Nowadays, the memo gets tossed. There are a rising number of pop artists — the Unyouth Movement we’ll call them — who don’t play by the rules. They have crossed the chasm into their thirties (or even beyond), but still make music for adolescents, which in many cases causes them to act like adolescents. Its a curious, glorious, and occasionally indecent phenomenon to witness.

Britney Spears (four kids and all) still wants all eyes on her in the club at age 31. Katy Perry (who at 28 is still hanging on) wrote a song in which she professes to “be your teenage dream.” Oddly enough, this satisfies the desires of her current beau John Mayer, a 35-year old who’s been known to date other musicians just out of high school. Maroon 5’s Adam Levine, he of body tattoos, young Victoria’s Secret model girlfriends, and deep v-necks, is 33. The list goes on: Pitbull – 32. Pink – 33  Usher – 34  Enrique – 37. JLo – 43. (Ever see the “On the Floor” video where Lopez presides like a slutty puppet master over a room of sycophantic club goers half her age? Awkward.) Madonna still wears spandex and pointy bras at age 54. There’s nothing wrong with people being over 30 (thank heavens) — it just seems a little weird when their day job is making music for the age 8-25 demographic.

All of this might help explain how and why the themes of pop music have…. shall we say, matured.  In the old days, pop music was associated with youthful notions of joy, optimism, yearning, and (naturally) pubescent curiosity. Even in 1987 when Tiffany co-opted the Tommy James and Shondell’s song “I think we’re alone now,” there was a certain naïveté to it — you thought she might be stealing kisses in the library.

But something happened along the way to 2013. Youthful notions got redefined. 17 year old Britney Spears did that Catholic schoolgirl thing, 15 year old Miley Cyrus was photographed in what appeared to be only bedsheets, and 18 year old Justin Bieber got busted playing beer pong. Underage pop stars began doing very overage things. And so, of course, did their fans.  Maybe the pleasures of “being free” in pop music have always been code language for being trashed, getting laid, and owning the world, but today’s kids have certainly become more forward about it. When Ke$ha sings: “Young hunks, taking shots/ Stripping down to dirty socks/ It’s pretty obvious that you’ve got a crush/ That magic in your pants, it’s making me blush/ We’re gonna die young,” she’s as subtle as a fart in church.  She’s 25, performing for 15 year olds who are behaving like they’re 21. 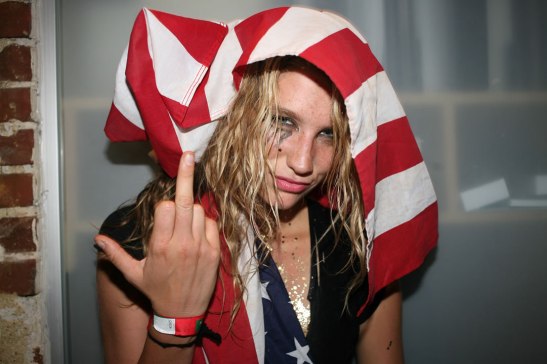 Is this a surprise? Not really. Peering through the glass of the Hollywood fishbowl guarantees you a warped view of life, but society’s entertainment reflects its values at some level. It’s no secret that given Western culture’s obsession with beauty and fame, we are forever looking for the perfect combination of the best things in life. Who doesn’t want to be good-looking, rich, and talented, yet still have the physical prime of your life just ahead of you? Big deal if the older folks want to be younger and younger kids want to be older. The grass seems greener on both sides, but we’re all aiming for the same holy middle ground — the one that houses a fountain of youth from which to insatiably quaff. Unfortunately, the result is often just a hangover. Or the sort of devil’s bargain that exists only in movies — like Justin Timberlake’s straight to video sci-fi thriller “In Time” in which everyone stops physically aging at 25, so they can stay hot, avoid beer bellies, and keep clubbing til the break of dawn. Until they genetically self destruct, that is.

Interestingly enough, Justin Timberlake was one of the two exceptions to the Unyouth Movement on display at the Grammys. His performance, while scintillating, somehow felt age appropriate. (It was even shown on TV in tasteful black and white) The new songs he played, “Suit & Tie” and “Pusher Love Girl,” have been criticized for not pushing pop boundaries enough, but they feel just right for him. At age 31, he’s stepping back from the cutting edge, utilizing full band ensembles, horn sections, and harps instead of sleek synth-driven beats, exhibiting a fashion sense that never goes out of style, and enjoying the finer moments of newly wedded bliss. It just so happens that he’s married to Jessica Biel and hosts dinner parties with Jay Z and Beyonce. A little unrealism is good for everyone.

The second exception to the rule was Prince, and he didn’t play a single note of music. He simply presented the Record of the Year award, exuding so much charisma that people gave him a standing ovation just for strutting on stage. Award winner Gotye appeared awestruck, but then again, we all were. Prince scratches his ass, and people think its cool. He carried a cane and wore bug-eyed wraparound shades, perfectly splitting the difference between 15 and 50.  Remember, this is the man who once famously sang “act your age, not your shoe size,” and he practices what he preaches — partying like it’s 1999 never seemed so old-fashioned.

The fact is, whether they like it or not, pop musicians are getting older by the minute. In fact, we all are. We just want to pretend that we aren’t. I guess, in that regard, pop music is doing what it always has — providing a healthy form of escapism. It just feels so much more obvious these days. We’ll probably never be able to pinpoint the exact moment when America’s youth staring losing its innocence and middle aged singers’ efforts to look young became pathetic (though its probably Madonna’s “Like a Virgin” and fat Elvis circa 1977, respectively), but I think we can all agree that the trend has turned into a trainwreck of epic proportions. Pop stars aren’t without hope, though. Ruess’s admission that Fun was a bunch of old dudes capitalizing on the fact that they were pretending to be young was actually quite endearing in its honesty. It was also very smart, since the best way to dodge the slings and arrows of your detractors is to launch them at yourself first.