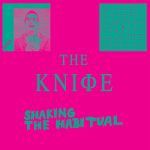 During the Great Northern War pandemic of the early 18th century, the ghoulish, bird-like masks of Eastern European plague doctors became synonymous with death. Although appropriately macabre, their long, horned beaks actually served a functional purpose — containing aromatic materials to filter away the bad smells thought to carry disease — but given society’s lack of understanding of germ theory, they inevitably failed; the masks’ wearers were not only unsuccessful at preventing death, they often portended it. In Stockholm alone, over one-third of the population was killed by the Plague, casting a grim pall of morbidity over daily life. It’s fitting that Swedish electronic duo the Knife began to don similarly creepy head wear in 2006; their third album Silent Shout was a mixture of fascination and dread also achieved through utilitarian means — spartan, mechanical beats, sharp synth whines, and demonically pitched vocals. Pitchfork’s Mark Pytlik devised the perfect label — “haunted house” — for what would become one of the decade’s most original sounds.

In the seven years hence, brother and sister Olof Dreijer and Karin Dreijer Andersson have remained largely silent, letting Silent Shout’s dark, minimalistic aesthete grow in stature within dance and indie music circles. When not exploring Andersson’s side project Fever Ray or creating soundtracks for inscrutable Charles Darwin operas, the siblings spent their time delving into post-colonial feminist studies and queer theory — examining the idea that our identities are malleable and cannot be defined by traditional gender, sexual, race, or socio-econcomic categories. It’s given them ample lyrical and sonic inspiration for their long-awaited double album Shaking the Habitual. By splicing together digital and analog instrumentation until they become indistinguishable from one another (or “queering the sound,” as Karin puts it), the Knife have engorged their sleek, mechanistic compositions with the blood of rich, organic instrumentation, blurring the boundaries between the human and the synthetic until all that remains is their all-encompassing, staggeringly singular sound.

It’s no coincidence that Shaking the Habitual’s most inviting songs —  lead singles “A Tooth For An Eye” and “Full of Fire” — contain its most politically charged moments. The former’s poly-rhythmic, pan-flute laced synth pop is entrancing enough to make you forget the Knife are dismantling the fiscal policies of Sweden’s wealthy conservatives beneath the trills. At the end of “Full of Fire’s” industrial four-on-the-floor stomp, Karin moans “Let’s talk about gender, baby/ Let’s talk about you and me” in a voice so deformed by her brother’s monstrous FX filters that you almost overlook the twisted pop culture reference she’s making to Salt N’ Pepa’s manifesto on feminist power through sex. The Knife want their messages heard; both of these tracks are accompanied by arresting, gender-bending music videos that tear at the very fabric of our assumptions surrounding masculinity, economic advantages, and sexual orientation — institutions the siblings challenge throughout Shaking the the Habitual.  Album closer “Ready to Lose” makes reference to a dysfunctional culture of deteriorating bloodlines and birthrights that is “ready to lose (its) privilege”, while on “Wrap Your Arms Around Me,” Karin admits “I’ve got the urge for penetration” — though you’re never sure if it’s hers or yours.

The Knife brighten the dark, melodic corners of “Without You My Life Would Be Boring” with flutes, sprightly percussion, and an Oriental musical scale, while highlight “Raging Lung” pairs the duo’s languid, loping rhythms with the unexpected colors of tropical, steel pan drums and squeaky horn-like synths. As the track winds down, the air shakes with the reverberations of some deep, baritone woodwind instrument that doesn’t so much make sound as impose its owner’s living breaths straight into your ears and chest cavity. It’s very much like what the Knife do throughout Shaking the Habitual — using both organic and artificial devices to inject a very human essence directly into the marrow of their music.  Shaking the Habitual is a dense, ungent knot of a record — the very sound of Silent Shout’s haunted machines still chugging but overrun by layers of moss and creeping vines.

Shaking the Habitual ‘s 96-minute run time openly tests your patience, especially considering its more avant-garde pieces lack vocals, verse-chorus structure, and traditional melodic elements. A deadpan Andersson acknowledged as much in a recent interview: “It’s nice to play with people’s time these days,” but the Knife take it one step further — they stretch your tolerance for what is even considered music. “Crake” is 53 seconds of nearly intolerable dissonance, immediately followed by “Old Dreams Waiting to Be Realized” —19 minutes of ambient drone parsed from noises the duo recorded in the depths of a boiler room. Both are eerie, strangely bewitching, and terrifying to listen to alone in the dark, proving that fear is a natural side effect of Shaking the Habitual’s exercise in exhaustion. “Networking” is the sound of the brain’s panic synapses firing on all cylinders and an even more harrowing descent into the pupil-widening anxiety the Knife first explored in “Forest Families.” “Raging Lung” ends with Karin’s ominous whisper: “There’s something in the system, that still circulates/ Dig a hole in the backyard/ And drain the blood.” If Silent Shout was a late night scare flick, Shaking the Habitual is the horror movie that happens in broad daylight.

The simple act of forming an opinion on Shaking the Habitual requires a head-on collision with the “bubble” conundrum first articulated by music critic Nitsuh Abebe and referenced by Lucas Fagen in his deconstruction of the Village Voice’s annual Pazz and Jop poll. Music of this extreme nature lies so far on the fringes of public (and even critical) taste that judgments about its quality only matter to a small subset of people. No matter how objectively “good” Shaking the Habitual may be, a vast percentage of the population isn’t going to care about spooky, tribal electro-pop because it’s such a niche sound to begin with. And those people will be missing out on a fantastic album.

On the title track to Silent Shout, the Dreijer siblings seemed fearful of mortality: “I never knew this could happen to me/ I know now, fragility/ I know there’s people who I haven’t told/ I know of people who are getting old.” On Shaking the Habitual, they bask in the encroaching decay, both physical and moral: “Can you take me for one last ride?/ I want to bend my soul again/ That’s what we do when we get older” Karin admits on “Raging Lung.” When faced with this sort of aberrant self-psychology, most people quickly turn the other way. The Knife insist you look it directly in the face and notice what stares back. If you can resist the strong urge to quarantine yourself from these sounds and ignore the weird masked musicians who ask unpleasant questions about gender, race, poverty, and dissolving social norms, you may be surprised by what it raises within you.

One comment on “Shaking The Habitual – The Knife – album review”

This entry was posted on April 7, 2013 by Jeff Goodwin in Full of Fire, Reviews and tagged A Tooth For An Eye, Full of Fire, Karin Dreijer Andersson, Olof Dreijer, Shaking the Habitual, Silent Shout, The Knife.