Here and Nowhere Else is a swift, brutal act of emotional transference — thirty minutes of rampant aggression that imparts distress upon the listener as surely as it provided catharsis for its creator. That 22-year old songwriter, Cloud Nothings’ Dylan Baldi, has a knack for crafting punk-pop gems that brim with estrangement and give voice to the time-honored grievances of early adulthood — feeling unimportant, not understanding things at all, and wanting to stay useless — without spilling a drop of its youthful ebullience. As unpleasant as Baldi’s coming-of-age realizations have been, his ability to marry them to sun-flecked melodies and indelible guitar hooks has always soothed their sting.

But Here and Nowhere Else pressurizes Baldi’s blackest worries into something as diamond-hard as it is melodically sleek. It’s eight songs of Cloud Nothings’ pop punk locked up and fed a steady diet of HGH injections — lean, ripped, and mean as hell. That it represents an even deeper progression into the unbridled noise rock that characterized 2012’s Attack On Memory makes Baldi’s personal contentment even more unsettling. As he shared recently about the making of Cloud Nothings’ fourth album: “I was feeling pretty good about everything, so I just made stuff that made me happy.” The result is an angry snarl of a record that’s tantalizingly short but ends not a second too soon, because anything longer would have left you more bruised and bone-weary than you could bear. Here and Nowhere Else is an exhilarating exercise in anger management — the sound of Dylan Baldi punching you in the face for a half hour and feeling better afterward.

Enlisting producer savant Steve Albini to uncover your true sound may be the single greatest cliché in indie rock, but in order to achieve that sonic epiphany, Cloud Nothings actually walked away from him. The feral intensity of Albini-helmed Attack on Memory is surpassed by Here and Nowhere Else, proving that rhythm section TJ Duke and Jayson Gerycz are the Cleveland trio’s real secret weapon. Gerycz’s thwacks and titanic drum fills propel opener “Now Hear In” with savage, locomotive vigor; his playing accelerates and slackens almost uncontrollably during the song’s second bar, an imperfection some producers might have expunged but John Congleton brilliantly leaves in, as if to suggest that even he can barely contain these tracks. Mid-tempo rocker “Psychic Trauma” begins with a strident, radio-friendly riff until forty seconds in when the tempo detonates in double time fury, a detour from which the group never returns. It’s a classic “fuck this” moment — as if Gerycz dropped a concrete block on the song’s accelerator pedal, and there’s simply no going back.

Baldi grapples with inarticulation and apathy all throughout Here and Nowhere Else. “There’s nothing new here/ No room to relate/ I don’t know what you’re trying to say” he roars on “Psychic Trauma” which races headlong until collapsing in on itself — an expression of Baldi’s indescribable rage at having nothing left to convey. When Baldi spits a Cobain-esque “Swallow!” from the bottom of his gut on “Giving Into Seeing” with Gerycz’s Grohl-like, cannon-fire snares barraging him, it’s hard not think of another power trio from a dreary, post-industrial town that personified generational disaffection two decades ago. The track is also a melodic twist on the Buzzcocks’ “What Do I Get?” in which the UK punk forefathers’ need for a fix is supplanted by Cloud Nothings’ fuck-it-all nihilism. “What do I get?” becomes “I’m losing it/ What do I care?” as Baldi sounds like a modern day Pete Shelley dropped on his head one too many times and dealt a permanent case of millennial malaise. There’s a vicious anhedonia to these songs, a sense that Baldi believes everything is beyond repair. He’s laid out this batch of noise pop so tar-thick and heavy that it threatens to overwhelm the message. Or perhaps that is the message — I’m overwhelmed. 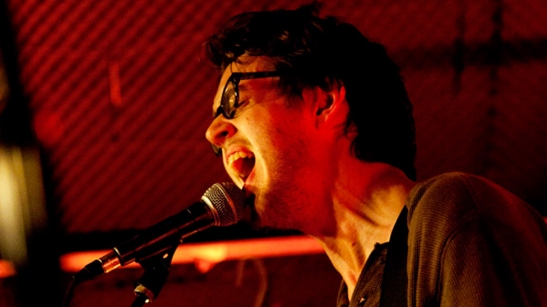 Here and Nowhere Else is the bitter, swarthy counterpoint to Japandroids’ Celebration Rock — eight adrenaline-laced anthems that leave you feeling sore and exhausted instead of emboldened. Frustration rock, if you will. There are no sing along choruses the likes of “Fall In” or “Stay Useless” to offer respite or reprieve — just suffocating slabs of fuzzed-out garage punk and the kind of bloodthirsty larynx shredding that keeps throat doctors gainfully employed. When Baldi professes: “I’m learning how to be here and nowhere else/ How to focus on what I can do myself” over the buzz saw power chords of the final track “I’m Not Part of Me,” it sounds almost triumphant — like he’s finally attained mindfulness and self-regard. But even that song ends with a single, devastating mantra: “You’re the thought that’s haunting me.” There’s almost two records here — the purging affirmation Dylan Baldi believes he’s made and the monstrous burst of vitriol that this album delivers. Be forewarned; Here and Nowhere Else feels like an exorcism because it thrusts its demons upon you.