Some years, music coalesces into a grander movement or reaches a watershed level of excellence, signifying general agreement that holy shit, this was a really great year. 2014 was not one of them. Music was incredibly varied, not just stylistically but in public perception of its quality. Even Pitchfork trimmed their traditionally long list of 100 great albums to a mere 50, perhaps a sign of the critical disparity and collective exhaustion felt in indie music circles.

I’d like to say the reason I reviewed less albums this  year was because I got too busy to keep up — buying a house, raising a family, sacrificing late nights of writing for precious extra hours of sleep. But that wouldn’t be entirely true.

Writing about music felt unusually tiresome and uninspiring this year. Few things I wrote in 2014 seemed to excite me much, but perhaps that’s because little I heard did either. Luddite Stereo has always been less about critical judgment and more a dialogue on the music I love. But I suppose it’s hard to speak to others, when very little is speaking to you.

Nonetheless, I’m happy to say I found 10 artists (half the usual amount) whose work compelled me enough to share them with you this year.  Maybe music will get better in 2015, or maybe I’ll just need to get better at finding ways to tell you about it. Creative expression waxes and wanes from one year to the next, but it’s the creator’s obligation to always communicate the truth of his experience. That’s the struggle, the passion, and, occasionally, the joy.

For over a decade now, Los Angeles multi-instrumentalist Ariel Pink has relied on equal parts shock and substance. His weird pastiche of 70’s and 80’s style FM pop/rock has matured from lo-fi, cassette-style demos to more refined, intricate feats of songwriting (2010’s “Round and Round’ and 2012’s “Only In My Dreams”), but the subject matter on his latest album pom pom is as trashy and overstimulated as ever.  “Sexual Athletics” and  “Not Enough Violence” are like car wrecks of New Wave pop and titillation, exhibiting Pink’s penchant for stylistic zig-zagging and his ability to both fascinate and repel. “I saw you murder/ I watched the knife as it went down” he divulges over salacious, soft rock synths on “Lipstick” then later assumes the perspective of the killer, purring: “Where are the guurrrrrrrls?”  With a campy, almost Bowie-esque penchant for flamboyance and a taste for deviance, Pink seems like he’s perpetually one lost marble away from pulling a Silence of the Lambs-style tuck job and vamping naked in front of all his fans and detractors alike — maybe as a joke, maybe not.

But just when you’re ready to bail, there’s “Put Your Number in My Phone,” three minutes of the catchiest hooks you’ll hear all year. Pink imbues a folksy guitar melody with the earnest, almost tender urge to connect with a pretty girl he just met that harkens back to the innocence of 60’s boy bands and vinyl 45’s. Pink is as deranged and chauvinistic as he is talented, but first and foremost, he’s a romantic. Not even his vaguely sinister insistence that the chick give up the digits to a weirdo she just met or the fact that this happened at some taco shack on Sunset Boulevard can deter from Pink’s ability to write a near perfect pop song. “Put Your Number in My Phone” is warm, eider-down pop that hits your head like a pillow — you’re only left wondering if you’ve been roofied.

“Can’t Do Without You” starts out as a pulsing signal beacon submerged beneath ten feet of water — muffled hand claps, murky beats and a looping, screwed down soul sample from Marvin Gaye, buoyed by Dan Snaith’s tender insistence that he’s incomplete without you. It’s gentle, hypnotic, and, like the best electronic music, insistent enough to tug at your lower extremities like an undertow. Much of Snaith’s past work as Caribou bears this feeling of the organic crossed with the digital — the sun-kissed psychedelia of 2007’s Andorra and the earthy textures of 2010’s Swim are exercises in elliptical form and squelched melody. But never has that balance been so fully realized as on Our Love, in particular the album’s title track and “Can’t Do Without You” — the best pair of singles from an electronic-oriented artist since Grimes dropped “Genesis” and “Oblivion.”

It all crystallizes at the 1:30 mark on “Can’t Do Without You,” that precise instant when the track breaks the surface and the distortion splashes away like a thin patina of water over the face of a cresting swimmer —- sleek, translucent, and crowned in sunlight.  From then on, the song simply adds layers and builds skyward, floating and ascending until it’s aquatic soul becomes no more than a raindrop among the cloud wisps. By then, Snaith’s repeated chorus is no longer an admission but a promise delivered  — you are airborne. 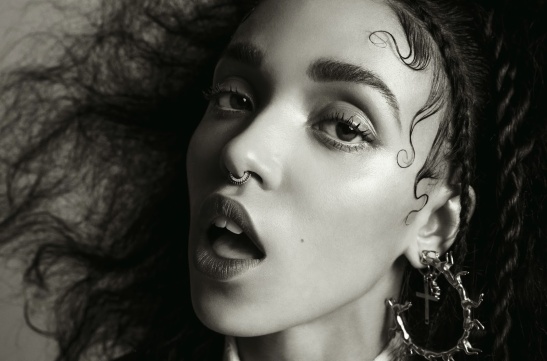 2014 was the year of the female pop artist but all of the sass and suggestiveness of Ariana Grande, Nicky Manaj, and Iggy Azalea combined felt like a birthday candle next to the furnace blast of cold eroticism that was FKA twigs’ debut album LP1. The already austere electronics from her first two EP’s have been paired back to an even more minimalistic sheen, giving the 27-year old London singer’s multi-octave voice more room to breath. Her soprano is now front and center, carrying the melody while anorexic rhythms and angular arrangements embody the sexual hunger and damaged psyche that FKA twigs once hinted at but now lays bare. “When I trust you/ We can do it with the lights on” she promises over songs encased in darkness.

This is R&B smashed into its basic atoms, pop music stripped of all pretense. The song structures of “Pendulum” and “Video Girl” are defined less by their spartan instrumentation (alarm-bell synthesizers, drum pings and fractured vocal samples) than the empty space around them. These are auditory illusions where your mind has to fill in the missing pieces to grasp the full picture— not so much compositions as negative imprints of them. It’s a backdrop that renders FKA twigs’ aberrant desires even more starkly.  “I can fuck you better than her” she whispers on the slow buring pheromone release “Two Weeks” whose video reveals a gold-clad, giant-sized twigs holding court over several mini exotic dancing twigs in a palace bath house. It’s a fitting visage for LP1,  equal parts sexual coming-of-age and coronation.

The muse for Real Estate’s melancholy is evident from Atlas’s first track “Had to Hear” — a sense of feeling like you’re not all there, of being one step removed from your surroundings, of being unable to express what needs to be expressed. The song is a yearning call to an estranged lover that evokes the Lemonheads’ cheery jangle and Galaxie 500’s wistful melancholy; lead singer Martin Courtney reduces himself to a “reflection in chrome,” sounding neither particularly surprised nor disappointed by the realization. Both Courtney’s lulling tenor and lead guitarist Matt Mondanile’s sublime fret play are an integral part of Real Estate’s atmosphere of longing. Entwined, the two achieve a distinct, immaculate sound that imparts unadulterated joy and unbearable sadness, often at the same time.

Atlas is an album rendered in passive tense. It describes a world where we don’t see or experience things; rather, things are seen and experienced by us. It captures a magnificent sense of the minutes ticking by, of opportunities missed, of trying desperately to make sense of it all before it’s too late. “I have no idea where the days went” are the final words of album closer “Navigation” a song whose title suggests Atlas is about the tools we use for finding our way. But perhaps it’s also a hint that the New Jersey quintet, having become one of indie pop’s most critically acclaimed groups, are feeling the weight of the world on their shoulders, . They answer the bell with such quiet determination and poise that you’d never know it. This collection of lucid dream pop seems like a gentle shrug, but it’s far more. Real Estate’s most artful act of strength is making what they do seem effortless.
(composed from excerpts of March 3rd, 2014 review)

Mark Kozelek’s dusky tenor and finger-plucked nylon melodies astound on career best album Benji, but the Sun Kil Moon front man’s greatest achievement might be translating life’s mundaneness into meaning. He has a bard’s gift for making everyday occurrences sound mesmerizing through unguarded, poetic expression which, in turn, was nearly overshadowed in 2014 by Kozelek’s propensity for being an asshole. But restraint be damned, you’ll get nothing less than unguarded conviction from the 47 year alt-folk curmudgeon of Red House Painters’ fame;  he’s brutally honest in both lyrical craft and opinion, as potent and sweetly toxic as a drag from an unfiltered cigarette.

Ordinary experiences like first crushes (“Dogs”), familial comforts (“I Love My Dad”),  and learning to respect your elders (“Jim Wise”) all become spellbinding moments in the context of Kozelek’s deft storytelling. When associated with a series of childhood tragedies, the vivid memory of watching a Led Zeppelin movie takes on near religious significance. Someone dies in nearly every one of these songs, which is shocking until you realize that there is perhaps nothing more commonplace — death comes to us all. Kozelek absorbs its power and makes it his own.

This entry was posted on January 3, 2015 by Jeff Goodwin in Best of, FKA twigs, Real Estate, Reviews and tagged Ariel PInk, Atlas, Benji, Can't Do Without You, Caribou, Dan Snaith, FKA twigs, Had to Hear, Kozelek being an asshole, LP1, Mark Kozelek, Out Love, pom pom, Put Your Number in My Phone, real estate, Sun KIl Moon, Two Weeks.