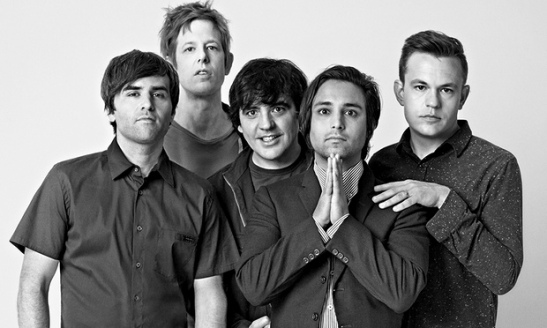 Lead single “Do You” from Spoon’s They Want My Soul is as shiny and polished as a newly-minted coin, but not even Britt Daniel can wipe away the flecks of punk grime that cling to his band’s currency. The veteran front man refers to the pleasures of being drunk as being “half out of the bag“ — dude can’t even embrace the concept of ephemeral inclusiveness found in the act of getting fucked up. After almost 20 years spent defining indie music’s gold standard, Spoon still acts like a bunch of outsiders looking in. But it’s that tension channeled through these songs’ workman-like professionalism that elevates Spoon’s ninth album They Want My Soul. They’re by turns turns joyous (“Let Me Be Mine”), aloof (“Inside Out”), and snarlingly defiant (“They Want My Soul”), a meticulously sculpted mixture of sonic gravel and glass.

It’s not “Do Ya?” Jeff Lynne-style, but “Doooooooooo Yoooooooou,” with Daniel employing minute details to maintain the track’s rhyme scheme, assonance, and cohesive musical arrangement all at once. (Notice how the chorus perfectly accents the “doo doo doo doos” haunting the backing track.) He’s equal parts Daryl Hall and David Byrne, with endless vocal tics and blue-eyed Philly soul that sloshes over the side of this smooth vessel. “Do you/ Run when it’s just getting good?” Daniel asks, but we already know the punchline. Of course not. You don’t release albums this good, this far into your career without being in it for the long haul. 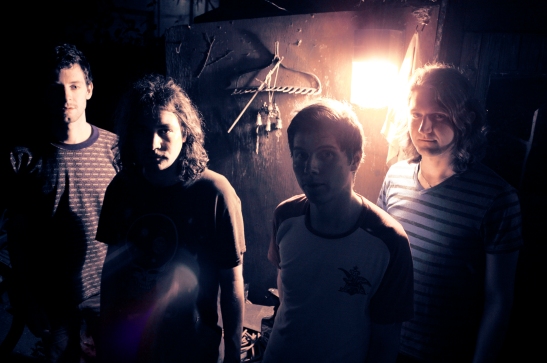 Much has been made of singer Adam Granduciel’s electrifying “Wooooo!” on “Red Eyes”, some labeling it the most spontaneous moment in 2014 indie rock. But if you listen carefully, he actually repeats the battle cry several times on Lost in the Dream, proving that even the most instinctual outbursts (like the rest of the The War on Drugs’ excellent third album) are far more thought out and anguished over than they first appear. This is meat and potatoes indie rock — with impenetrable vocals, reverb-laden guitar hooks, and truck loads of anguish all impeccably filtered through the unlikely vacuum of expansive, 70’s-style stadium rock.  The title track and “Eyes to the Wind” are the morose, wide screen portraits of disillusionment that Ryan Adams’ been pining for since Gold, while the drum machines and eerie synths of “Disappearing” invest Fleetwood Mac’s coked-out melodies with a Pet Shop Boys-style vacancy.

Oxymoron abounds on Lost in the Dream — saxophones and harmonicas mingling with dye-cast electronics, warm guitar chords pitted against soul-crushing ennui, and a spacious production hollowing out space for Jason’s intimate misery.  The first three tracks sound marvelous but describe crushing anxiety (“Under the Pressure”), sleep deprivation (“Red Eyes”), and, quite literally, “Suffering.”  But emotional honesty is what makes this emptiness stick. The War on Drugs walk the fine line between artifice and impulse with fake-it-till-you-make-it earnestness, confirming that catharsis, even when well-calculated and besieged by despair, can still be real.

St. Vincent still bears the cracked mannequin smile that made its way into the jittery trance of Annie Clark’s last album Strange Mercy, but it’s bolstered by taut rhythms that ooze with cocksure swagger. “Huey Newton” is driven by a slippery snare beat as Clark’s coy tenor conjures images of impressionistic dread — feelings transcribed on flashcards, knives, and ketchup blood.  Unexpectedly, the song steers down a different corridor, giving way to celestial, prog-rock organs before detonating into a gargantuan fuzz riff that belies Clark menacing, axe-wielding prowess and her slew of inspirations, from Black Sabbath to Bowie to Billy Corgan.  “Entombed in a shrine/ Of zeroes and ones” she bellows as an unholy choir rises up to surround her — it’s one of many wow moments on St Vincent that capture technology’s encroachment on human existence.

“Digital Witness” is another. Propelled by Stax horns and P-funk beats, it’s lively, frantic, and fiendishly addictive — much like the dystopia it promises.  Clark observes: “People turn the TV on/ It looks just like a window,” but the question remains a window to what — the outside world or hell? Thoreau once presciently chastised our insatiable need for the latest word: “Hardly a man takes a half-hour’s nap…but when he wakes he holds up his head and asks ‘What’s the news?'” On “Digital Witness” Clark takes the quandary to its logical, terrifying extreme — she simply stops sleeping. Essential human needs give way to human wants. The inescapable clutter of life presses in upon us. There’s a sensation of ice and heat on St. Vincent — Clark captures cold, computerized unease even while making your palms sweat. 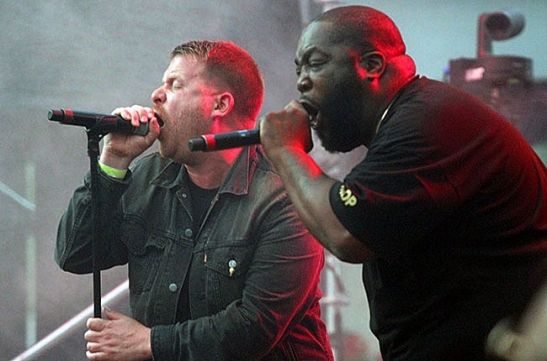 The night the grand jury verdict of not guilty came down against a white Ferguson police officer accused of murdering a black teenager, rapper Michael Render (a.k.a Killer Mike) gave a riveting speech to a concert crowd in nearby St. Louis.  Killer Mike’s delivery was sermon-like, both in its fervor and references to Martin Luther King. Words from a 1968 MLK speech were once again uttered: “Riots are the language of the unheard.”  Killer Mike stopped short of encouraging retaliation, but he was livid, vulnerable and terrified — at one point, choking up at the thought of his two young sons dying like Michael Brown. That night’s Run the Jewels’ set crackled with a rare electricity that only the right artist, in the right place, at the right moment in history can hope to bottle.

The duo’s remarkable history makes it all seem preordained. Run the Jewels began in 2013 as the unlikely partnership of two legendary, underground rappers who had paid two decades of dues but never experienced the same level of recognition as their peers — until they joined forces. Powered by El-P’s pulverizing production and machine-gun delivery and Killer Mike’s syrupy, southern drawl, the Run the Jewels free mix tape was a moment of self-actualization — an exhibition of old school beats and devastating flow that had hip-hop heads hollering hallelujah. It’s masterful follow up, Run the Jewels 2, feels like a veritable Second Coming. It proves that RTJ are more than just new players on the scene, but the best at the game since Outkast and the most relevant act in rap today (sorry, Kendrick, ball’s back in your court now.)

Run the Jewels 2 is an augmentation of its predecessor in all ways. El-P’s 808 beats are thicker, doper, and just plain nastier. Killer Mike’s liquid flow has grown even sharper and more incensed.  With laser-guided missile accuracy, the pair pinpoint abuses of power from all fronts— police, preachers, politicians — and attack it with a vitriol that’s only intensified by its cerebral edge. It might be the ultimate feel good story of 2014 if only Run the Jewels 2 didn’t make you feel so utterly outraged. “Close Your Eyes (And Count to Fuck)” co-ops Rage’s Zack De La Rocha into a stinging indictment of racial injustices, “Lie,Cheat, and Steal” demonizes our country’s rulers, and “Oh My Darling (Don’t Cry)” delivers the most scalding diss of the decade (“You can all run naked backwards through a field of dicks.”) Run the Jewels accomplish something by rapping than rioting could not — they inspire and transform rage into a constructive dialogue. Speaking after his onstage break down, Killer Mike said on CNN: “Those feelings are what invigorate you the next day to fight the better fight.”

“You feelin’ history being made!” goes the opening diatribe on “Jeopardy,” and we had no idea how soon Killer Mike’s prophecy would come to pass. But he did. Remember, RTJ2 was written and recorded before America’s race issues reached a flash point — not because Killer Mike and El-P were guessing, but because they knew something wicked this way was coming. Like the oppressors it denounces, Run the Jewels 2 puts your mouth to the curb and stomps. Since 2013, the burning question has been how haven’t you heard Run The Jewels, but from here on out, it will be another — how the hell can you afford not to?

1) D’Angelo and the Vanguard
“The Charade” — Black Messiah

“I been away too loooooong” D’Angelo confesses early on Black Messiah, elongating that last word into a lonesome growl against a sublime, unexpected chord change. You’d swear the Reverend Al Green was right beside you, preaching the gospel of sweet regret.  On his astounding comeback, it’s not a stretch to say D’Angelo cements his status as R&B superhero, an amalgamation of his predecessors’ best qualities — Green’s yearning ache, Gaye’s sultriness, Stevie’s unadulterated joy, and Sly Stone’s simmering discontent. But what’s uncanny is how in spite of all these influences and the fact that this record took almost 15 years to make, Black Messiah still sounds unerringly of its time.

“1000 Deaths” and “The Charade” are barrages of seething funk and slinking soul that give voice to the societal upheaval that reigned in Ferguson, Egypt, and Occupy Wall Street .The demons that delayed D’angelo from releasing a follow up to 2000’s masterpiece Voodoo read like a rap sheet of the new millennium’s rich and famous  — alcohol, drugs, sex, and fame’s Faustian bargain. It’s just that D does something with his pain that no one else can — imbue it with the full spectrum of love, from  “Really Love”‘s acoustic tenderness to the straight-up, baby-making devotion of “Another Life.” Black Messiah is a sly, sinewy piece of R&B that strips down to the waist but never reveals all its glory, even after dozens of listens. It’s both a slow-release pleasure capsule and a musical time capsule — indicative of its era while evoking the greatness of others’. In every sense of the word, a classic.