Demdike Stare are one of several artists in the oddly labeled musical micro-genre Witch House (also called Haunted House or Drag) who create industrial, dub-influenced electronic music that incorporates chopped-up and screwed beats, menacing atmospheres, and distorted sound effects. Far from mainstream, their work bears a sinister, minimalistic quality that might best be described as a cross between the dance floor and a dungeon. 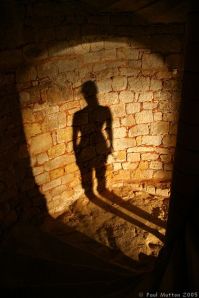 This isn’t music I usually pay attention to, but something I recently heard (and saw) from the duo is worth exploring. Taken on its own aural merits, “Haxan” (from 2009’s Symbiosis) is a formidable song. It remains in a state of constant building without ever reaching a climax — a difficult, clever thing to pull off in electronic music. It’s due, in large part, to the two ominous, serpentine synthesizer riffs that intertwine early on, then perpetually rise and fall to song’s shadowy percussive clatter and rumbling sub bass. The effect is hypnotic; six and a half minutes goes by in the blink of an eye.

But what makes “Haxan” truly memorable is its pairing with a montage of video clips (put together by The29Nov Films) from “Haxan: Witchcraft Through the Ages,” the 1922 Danish silent film about pagan worship in the Middle Ages.  In its original context, a few frames of possessed nuns dancing in hysterics while the Devil lurks nearby might induce an almost comical, scare-your-kids-silly vibe, but when backed by the Demdike Stare song, the occult images gain more weight, and the whole thing is imbued with a decidedly creepy, skin-crawling tone.

A similar thing happens in Demdike Stare’s music videos for “Extwistle Hall vs. Forest of Evil (Dusk)”  and “Forest of Evil (Dawn)”  in which obscure European 70’s film footage (from “Valerie and her Week of Wonders” and “Hallucianation Strip,” respectively) is spliced and repurposed to create an unsettling melange of the sexual and surreal. There’s an evil-looking man with terrible dental work, gratuitous love-making (mildly NSFW), people morphing into plants, and some self-flagellation (naturally). I can’t tell you what the hell is happening in either of these videos but the end result is as magnetic as it is disturbing. 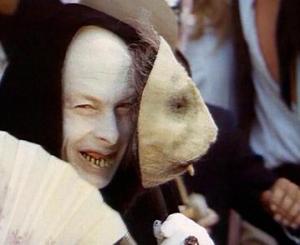 Demdike Stare, who specialize in creating eerie, atmospheric instrumentals, have turned the concept of a making soundtracks for movies on its head — they instead use old films, which are sometimes shown on huge screens at the duo’s concerts, as the visual backdrop for their throbbing, spooky blend of witch house.  Separated by genres, languages, and nearly four decades of pop culture, music and film have been unexpectedly woven together to create an experience that could not have  been acheived without one or the other. Strange bedfellows, indeed.

This entry was posted on February 1, 2011 by Jeff Goodwin in Demdike Stare, Electronica, Witch House.