Once crowned saviors of rock n’ roll by the UK press before they’d even released a proper album, then crucified for not living up to the ludicrous expectations attached to that title, the Strokes have spent nearly a decade trying to step out of their own shadow. In 2001, their first album, Is This It was so fully formed and universally praised that their smartest move was to make nearly the same record on 2003’s Room On Fire. Pressures, creative differences, and side projects subsequently mounted, and in the eight years since, the Strokes have released exactly one album, 2006’s meandering, listless and imminently regrettable First Impressions of Earth, an album so maligned for its dual failure to live up to past successes or hint at a meaningful evolution of sound that most fans like to pretend it never happened. As far as they’re concerned, it’s been eight years (an eternity, really, in the music business) since the last real Strokes’ album — enough time for dozens of copycat bands to come and go, for musical genres to proliferate and splinter into sub-genres, for the public’s tastes to completely change, and for a band to be forgotten.

But a funny thing has happened in the Strokes’ absence; people have actually grown nostalgic for the kind of ramshackle, grimy guitar-pop the New York City band created so effortlessly a decade ago. Pop culture is eating its own tail so quickly that the Strokes are quite possibly the first band to go in then back out of style and return as vintage before they’ve even retired. The passage of time has soothed most of the backlash, too; these days, it’s alright if you can’t top Is This It —people just want to hear something like it again, and who better to deliver that than the creators themselves. So when rumors of a new album became reality and the band released its first single, “Under the Cover of Darkness”, a song that sounded like the best parts of “Last Nite” and “Someday” rolled into one swaggering jangle of melodic bliss, people really got excited.

As it turns out, it’s not quite so easy to duplicate greatness. To be blunt: If you’re hoping for a return to the classic Strokes’ sound that “Under the Cover of Darkness” tantalizingly suggests, Angles will disappoint you. But judged on its own merits, it probably shouldn’t. The band’s best qualities are still here — the same tension between the Julian Casablancas’ taut songwriting and disheveled vocal delivery, the same devil-may-care attitude and self-effacing wit, and most importantly, the same fantastic hooks. But they’ve been moved around and reassembled on top of new creative influences and recording flourishes. Risky, often disjointed, but also rewarding, Angles is not a return to form, but a reformation and hopefully a sign of better things to come.

A minute into opener “Machu Picchu” and a one thing immediately strikes you about the band’s fourth album. The playing still sounds sharp, unpretentious, and distinctly Strokes-like, but the fuzzy, garage punk shadows have been swapped out for a gauzy New Wave sheen. For a band that’s built its reputation on lo-fi, tumble-out-of-bed production values, Angles sounds surprisingly polished and (gasp!) even mature. There’s still an edginess to the record, but it feels a lot less like Velvet Underground’s Loaded, and more like the Police or Blondie circa 1981 — stylish, bouncy, and finely tuned. This kind of switch in style isn’t exactly unprecedented in the New York City music scene; after all, CBGB’s cramped quarters were home to a near identical melding of pop gloss and post punk some thirty odd years ago. The difference is that back then such a move was considered revolutionary; today, it’s common enough to simply be known as a “crossover.” Ultimately, whether you consider the Strokes’ sonic shift a natural evolution or conscious marketing decision may very well characterize your reaction to Angles.

As a creative inspiration, the 1980’s are currently all the rage in pop music — there’s a movement among indie artists (Cut Copy, Twin Shadow, Washed Out) who are taking unabashed pleasure in reviving synthesizers, eerily precise 808 sounds, and spacious pin-drop production values. But somehow, it’s still a neat surprise to hear the Strokes, modern princes of gritty authenticity, doing it. Sure, they dabbled in Cars-like pop jauntiness on Room On Fire (see Albert Hammond Jr.’s guitar solo from “12:51”) but on Angles they sound like they’ve been completely reborn in the Reagan era. “Two Kinds of Happiness” could have come straight off of Heartbeat City for God’s sake; you can tell from their cadence that Fabrizio Moretti’s drum beats are man-made but they’re tracked to sound exactly like a drum machine. “Games” combines the airy, crystalline detachment of New Order with a Blondie-like undulating disco groove. There are bright, perky synth splashes everywhere; after several listens to Angles, my lasting impressions are of keyboards and guitars that sound like more keyboards.

But there’s still plenty of the moments that remind you of the band’s signature strengths — the way Moretti and bass player Nikolai Fraiture leave space between notes to let “Machu Picchu” breathe, and the ability of “Taken For a Fool” to rise from good to extraordinary in just the time it takes to hear a chorus. “You’re So Right” is a smart exercise in contrasts — dark, dirty guitar bursts sound even more threatening when pitted against brilliantly echoing arpeggios, and Casablanca’s vocals are way up in the mix even though he sounds like he’s singing through a rag. By and large, you’ll find the Strokes’ trashiness and raucous energy are intact. “We never grew up” Casablancas admits before dropping the legendary line, “Monday, Tuesday is my weekend.” But there are hints at deeper introspection: “There’s no one I disapprove of more or root for more than myself” and “I wanna be outrageous/But inside I know I’m plain, so plain.” These aren’t character conflicts that Casablancas showed us ten years ago, and they’re encouraging signs that he’s maturing as a songwriter.

And then there’s “Under the Cover of Darkness” which is quite frankly the best thing the Strokes have recorded since Is This It. The band knows it, too. Casablancas grins: “Everybody’s been singing the same old song for ten years” presumably about gems off their first album while the rest of the gang effortlessly recreates that early magic underneath him. Nick Valensi’s and Hammond’s wiry guitar lines are bold and crisp, but there’s no endeavor to make it sound like a symphony of instruments or a double-tracked wall of sound. It’s just a straight up rollercoaster of hooks that hammer at the brain’s pleasure centers, exhausting and invigorating all at once. Therein lies the Strokes’ extraordinary appeal — no band with this level of talent tries so hard to make it sound like they’re getting so much out of so little. 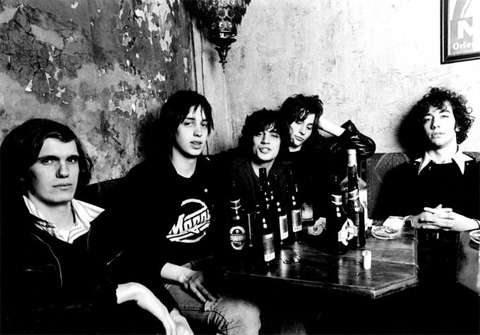 On the flip side, there are moments when Angles falters. “Call Me Back” is the kind of song that feels like it should be going somewhere but never quite arrives — it’s surprisingly lazy songwriting that lacks any emotional punch. Album closer “Life is Simple in the Moonlight” sounds like the Strokes imitating Phoenix, an indie pop band who found critical success in 2006’s It’s Never Been Like That by imitating the Strokes. Depending on your mood, this form of reverse tribute can be either ironic or just plain unoriginal, and at its best, feels more like a repayment of a debt than anything else. I didn’t like “Gratisfaction” the first few times I heard it, either— its faux soul swing was a bit too close to a Billy Joel song for my blood — but after a few listens it’s already begun to improve and was apparently a live favorite at the band’s shows during this year’s SXSW festival.

With great moments and weak ones, Angles fits the very definition of a transitional album. There is an uneven, fractured sense to the record — it lacks the sonic consistency and start-to-finish greatness that Is This It and Room on Fire possessed. Casablancas acknowledges that his absence from studio sessions (he recorded vocals separately and emailed them to the group) was extraordinarily difficult for the band to work through and caused a noticeable lessening of the album’s continuity. I expect Angles will get quite mixed reviews as a result. After all, it’s hard for any critic to get behind an album when even the band is having misgivings about it.

But in the end, there’s plenty here for fans to like. “Under the Cover of Darkness” and “Taken For a Fool” are legitimate classics, and the rest of side one is pretty damn good. Considering that Angles is actually a bounce back from the near career-disaster that was First Impressions of Earth, I find myself replaying and enjoying it far more than I expected. The band sounds like they’ve righted the ship, experimented with some new ideas in their creative process, and, in fact, evolved. In terms of talent and sheer songwriting ability, the Strokes still have the goods to create groundbreaking music, more so than every one of bands you hear today who have borrowed from them. Valensi states quite plainly: “I feel like we have a better album in us, and it’s going to come out soon.” It’s just taking more time than they (and we) would have liked.

Buy it from Amazon.

This entry was posted on March 22, 2011 by Jeff Goodwin in Angles, Reviews, The Strokes.