15) The Knife
“Full of Fire” – Shaking the Habitual

“How do you build an album about not knowing?” ask Olof Dreijer and Karin Dreijer Andersson in the rambling manifesto that accompanies Shaking the Habitual. The answer is, by questioning every inequity that society regards as truth — hyper-capitalism, outdated sexual mores, and environmentally unsafe drilling practice (to name a few). The Swedish siblings even questioned keeping their moniker The Knife on Shaking the Habitual because it was such a radical sonic departure from their previous efforts. Fittingly, they kept the name — it perfectly encapsulates the duo’s bleeding edge, electronic experimentation: utilitarian, threatening, and universally incisive.

Shaking the Habitual’s live instrumentation and unwieldy sprawl feel far more corporeal than their ghostly, electro-pop landmark Silent Shout. The songs have hooks, but sound as unsettling as the topics they confront you with; race, gender, class, economics, and social norms. During the album’s bleakly terrifying, 65-minute confines, you feel empowered yet disconcerted, connected yet impossibly alone. Shaking the Habitual is the the most political dance record since M.I.A.’s Arular, but rather than entice your hips, it hammers away at your nervous system. It’s also the Knife’s most avant-garde album, at times damnably so — one song is 19 ambient minutes of ominous furnace sounds — but lead single “Full of Fire” is the sound of the detonations in the belly of that beast.

There’s a moment at 4:39 where “Full of Fire” hiccups and things suddenly go ape-shit with industrial squelches, popping synth bubbles and stun-grenade bass, recalling the epic middle section of Underworld’s “Born Slippy (Nuxx).” At the song’s end, Karin’s not only parts ways with gender but loses her humanity as well — the heavily processed female vocals turning androgynous then mutating into an inhuman moan that finally swallows itself.  It’s a jarring finish that satisfies another one of their manifesto’s claims: “No habits! There are other ways to do things.” No one but the Knife could have done this.

For the third year in row, Burial (a.k.a. William Bevan) quietly released an EP in the dead of winter like a mystery neighbor dropping off Christmas cookies whilst everyone slept — identity undisclosed and appreciation unnecessary (your naughty or nice list was already finalized…no time to add anything to that best of 2013 list).  Except you’d be insane not to; online listening parties for Truant/Rough Sleeper and Rival Dealer EPs, released almost exactly one year apart in December 2012 and 2013, still felt like events. Once considered sui generis, Burial’s ominous, urban collages of click n’ whir beats, warped vocal samples, and vinyl crackle have trickled into the ground water and influenced a generation of of the R&B and electronic producers. The only one who seems like he’s drawing inspiration from a different well is Burial himself.

You have to first go back to 2007 to fully appreciate his progression. Burial’s songs on seminal Untrue were not only unique but profoundly private — perfectly constructed sonic shapes as recognizable as the Kubrick’s obelisk and nearly as impenetrable.  When Burial’s sound broadened to include rave and jungle elements on 2011’s Kindred EP, it felt like keyholes into his dark world. But on these newest EPs, he’s cracking the door open. The vocal snippets, once estranged and covetous, now belie gentle acceptance (“This is who I am”, “You are not alone,” etc.) “Rough Sleeper” uses warm textures (organs, a jazzy woodwind, wind chimes) to lighten the murk and “Hiders” features unabashedly sanguine, soft-rock synths. Burial’s sound has felt so alien for so long that the idea of him embracing a mainstream pop melody is almost shocking. It works wonders.

Final track “Come Down to Us” boldly concludes with a poignant sample from transgender filmmaker Lana Wachowski’s Human Rights Campaign speech.  “This world that we imagine, in this room,” Wachowski suggests, “might be used to gain access to other rooms…to other worlds.” It’s a fitting description of Burial’s evolution on Rival Dealer, an EP Burial says was intended to to serve as an “angel’s spell to protect…against the unkind people, the dark times, and the self-doubts.” His music (and namesake, for that matter) have always suggested being underground — the ten-minute tracks extending downward like mammoth, subterranean chambers, compartmentalized into hidey holes, secret doors, and sonic nooks and crannies. But the last five glorious minutes of “Come Down To Us” feel like a sky light into the outside world — its warm chords and major keys streaming down like starlight, illuminating the rest of Bevan’s world (though there’s rain, always rain). It’s an unlikely beacon of hope — the sound of Burial looking upward.

Kurt Vile doesn’t strike you as a lonely guy. He’s happily married, has two lovely daughters (ages 1 and 5), and is laid back in an affable, West coast sort of way — strange given that he’s from Philly, a city known for its hard knocks, blue-collar toughness, and insular brotherly love. But when he plays, you hear things; finespun finger picking patterns drowned in reverb, that wry, sad voice, and a treasure trove of depressing ruminations emptied out over gorgeous melodies, like thunder clouds threatening a perfect summer day. The effulgent, dream-like Wakin On A Pretty Day explores this sense of dichotomy within Vile — between melancholy and contentment, lucid prowess and stoned stupor, a vagabond performer and a loving family man. (On “Snowflakes Are Dancing,” Vile admits: “When I’m away out there/ I wanna go home/ When I am home/ My head stays out there.”) Wakin’ is 70 minutes of altered-state bliss that floats by like the breeze, imparting the kind of comfort and sense of acuity that you only get with a good, old-fashioned buzz, fleeting yet eternal.

On pensive tracks like “Wakin on a Pretty Day” and “Girl Called Alex,” Vile marries sprawling, classic rock riffs to Pavement’s slacker aesthetic— an intriguing pairing since the former’s expansiveness is diametric to the latter’s melodic thrift. As far as rock guitarists rank, Vile is a bona fide prodigy in an understated sort of way, his playing marked by banjo-style open tunings, harmonic inflections, and colorful textures. “Life is like a ball of beauty/ That makes you want to just cry/ Then you die” Vile sings on “Too Hard”, and you get the sense that for him, that beauty lies in playing his instrument.

The album’s 10-minute closer, “Goldtone,” transforms Vile’s meditations on pleasure and pain into a melodic mother lode. “Sometimes when I get in my zone/ You’d think I was stoned/ But I never, as they say, touched the stuff” he drawls laconically “I might be adrift, but I’m still alert/ Concentrating my hurt/ Into a gold tone.” Rarely has a song’s delivery so faithfully embodied its ethos; Vile’s playing imparts the very feeling he’s questing for, the notes drifting off his frets like puffs of smoke. Wakin On A Pretty Day leaves you with a sumptuous yet unhurried feeling — the ultimate contact high.

12) Deerhunter
“Back To The Middle” – Monomania 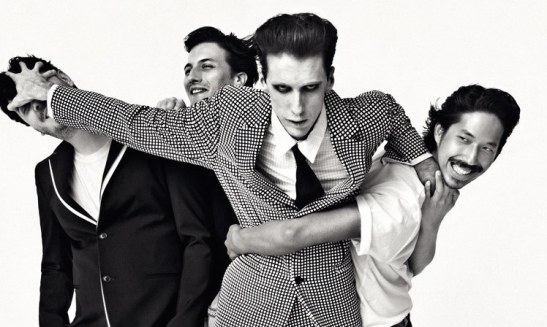 Deerhunter’s Bradford Cox has made a career out of provocation. Bating audiences with hour-long, drone covers of “My Sharona,” cross-dressing to accentuate his spindly, emaciated body (Cox suffers from Marfan syndrome), and sharing stories about decapitations of childhood friends — these are a few of his favorite things. That sense of severity nips at the ankles of Deerhunter’s sound. The quartet personify ugly beauty — stretching 60’s-inspired pop melodies over noise and art rock skeletons, lancing eider-down atmospheres with savage guitar noise, and subverting pop music into weird, avant-garde forms.

If 2008’s Microcastle and 2010’s Halycon Digest put those extremes up on a pedestal, then Monomania grinds them down to greasy, primordial paste. Marked by no-nonsense rock riffs and unkempt production values, the quartet’s sixth album is their loosest, most ramshackle effort to date. On “Pensacola” and “Back to the Middle,” the Georgia band channel their inner CCR with swampy, shit-kicking licks, forgoing the guitar latticework of past epics “Desire Lines” and “Nothing Ever Happened.” Locket Pundt’s floating riffs still mesmerize on “Sleepwalking,” but Cox darkens the song’s doorway upon exit: “Can’t you see/ Your heart is hard now?”

Monomania is the first album that doesn’t feel like Deerhunter expanding outward, but rather collapsing inward — cobbling together pieces of what we already know. That’s not a bad thing, given that there are enough wrinkles, tweaks, and sly hooks to keep Monomonia crackling with intensity; Deerhunter have never sounded more punk than the scorched-earth climaxes of “Leather Jacket II” and the title track. Cox couldn’t care less. Ever the cautious wordsmith, he says in interviews: “My idea of punk is not being interested in what other people think of punk….My job is simply to sodomize mediocrity.”  Grimy and exceptional, Monomania does the deed.

“I get it/ I get it.” “It’s yours.”  “Own it.”  Drake stakes claims all across Nothing Was The Same, reminding us that his third album is ultimately about possession — whether it’s money, ass, or the mantle of this generation’s greatest rapper turned R&B singer. Kanye might be edgier, but damned if Drake hasn’t found that sweet spot between street cred and non-stop radio play.  “Make songs like rap that sell like it’s pop” he boasts, then goes ahead and does both on booty-shaking brag session “Started From the Bottom” and “Hold On, We’re Going Home,” a buttery, JT-style slow jam that makes hot love and emotion sound cooler than the other side of your girlfriend’s pillow.

You actually get the sense that nothing is the same for Drake after this album. He cuts ties with old flames, family, and friends alike while announcing his intention to be the idol of “a generation with no patience.”  Producer Noah “40” Shebib’s looped, opium den beats provide the appropriate backdrop of opulence — a sinuous female vocal sways through “Pound Cake/Paris Morton Music 2” like a gold chain dangled from a hypnotist’s fingertips, as guest millionaire Jay-Z professes his and Drake’s unearthly wealth, short and sweet: “Cake, cake, cake, cake, cake, cake.”

Drake may not have the greatest flow, most memorable lyrics, or catchiest hooks but the summation of all his skills grants him a tall, dark, and dangerous aura. He’s genuinely charming (check out the “I guess girls only give me one date” line on Ellen) and cocksure in his sleaze: (“She just wanna smoke and fuck/ I said ‘Girl that’s all that we do'” from “Langauge”) Hip-hop rival Kendrick Lamar took pot shots at Drizzy in 2013, claiming that he “tucked a sensitive rapper back in his pajama clothes,” but Drake’s clearly got it going on under those 1000-thread count sheets.  Dudes wanna be him, and girls wanna be with him, wherever the bed might be. More than any other rapper alive, he gets to have his cake and eat it too.

This entry was posted on January 2, 2014 by Jeff Goodwin in Best of and tagged Back To The Middle, burial, Come Down To Us, Deerhunter, Drake, Full of Fire, Goldtone, Hold On We're Going Home, Kurt Vile, Monomania, Nothing Was The Same, Rival Dealer, Shaking the Habitual, The Knife, Wakin On A Pretty Daze.