Old has two distinct sides, just as its title conveys a dual meaning. There’s the Danny Brown on side A who at thirty two, now recognizes his mortality, and there’s the “old Danny Brown” on side B — the classic, hair-braided, AK-47 wielding teenager who sold crack to make ends meet. The latter’s  bravado is what we’re are accustomed to. “Side B (Dope Song),” “Dip,” and “Way Up Here” are vintage Danny Brown tips — manic, shrill, and stripped to the studs. Brown’s frantic yelp plays rhythmic counterpoint to spartan electro beats built on 808’s and air raid siren synths. His boasts remains as lascivious as ever; verbal gymnastics supplement sexual ones on “Handstand,” “Break It (Go)” has a drum break that sounds like an ass getting smacked, and “Dope Fiend Rental” owns the inimitably tender chorus “Open wide, ho.”

But lurking at the end of Old’s side A are “Lonely” and “Clean Up” — textured, sample-heavy jams where Brown introspects a life dominated by addiction, regret, and depression. Over finger-picked arpeggios and a harp glissando, Brown admits to drug money-funded abortions, toxic habits, and the emotional havoc he’s wreaking while on the road (“Hotel rooms, crushing pills and menus/ Daughter sending me messages saying “Daddy, I miss you.”) He arrives at a simple conclusion: “It’s time for me to clean it up/ I came too far to fuck it up.” Brown’s Kush coma is too potent to be ignored but condemnable all the same. Is Old a reckoning, a coming to terms, or a brazen laugh in the face of the reaper? Yep, all of them.

Most year-end accolades for Sunbather have come with some sort of disclaimer for the general public: “Black metal for people who don’t like black metal.” And that’s partly true since Deafheaven are less known for what they’ve accomplished inside one of music’s most foreboding genres and more for what they’ve done outside of it. Infusing elements of post-rock and shoegaze into black metal’s terrifying sonics, Deafheaven have constructed an album that feels enormous yet airy —  Kerry McCoy’s gigantic slabs of guitar melody interlock with George Clarke’s demonic shrieks like aural re-bar and concrete. That pink cover is meant to be deceiving — it imitates what you see while staring through shut eyelids at the sun. And from the first notes of “Dream House,” listening is like opening your eyes and getting your retinas burned. Sunbather seeks to be celestial and succeeds; it’s both supernova and black hole.

For some newbies, Sunbather will be the ultimate butterface — appreciating its breathlessly gorgeous instrumentation is akin to fixating on a blind date’s stunning curves in lieu of her brutal complexion. Clarke’s lacerating vocals are inescapable, but to dwell on this as a grievance completely misses the point. Deafheaven have introduced a series of separate elements that, once combined, can no longer be reduced to their individual parts — they become something else entirely. Clarke’s voice is an instrument unto itself, its shredded timbre crucial to Sunbather’s musical DNA sequence. Surrounded by twinkling acoustic passages and symphonic build-up, the loud parts of “Dream House,” “Vertigo,” and “The Pecan Tree” do more than surprise. They feel like cathartic revelations. Sunbather isn’t post-black metal, black shoegaze, or ambient drone — it’s something unclassifiable that, given the chance, becomes an epiphany. 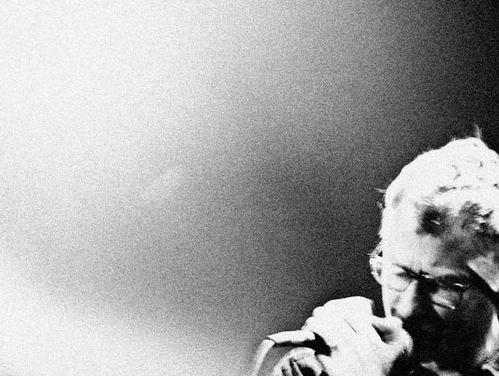 The National make music by which you measure your days.  Matt Berninger has grown up, gotten married, had kids, and entered middle age before our very eyes — his poetic dirges detailing every triumph and misstep, every precious inch of maturity gained, and every regret wasted along the way. I followed along beside him — clinging to the end of my 20’s during the knotted energy of Alligator, grappling with the reality that more doors were shutting than opening in my 30’s over the brooding Boxer, and facing the trials of parenthood during High Violet’s glorious coming of age. Berninger’s editorials on his own struggles, somehow both cryptic and elucidating, brought moments of reassuring comfort.  “With my kid on my shoulders, I try/ Not to hurt anybody I like” he admitted on 2010’s “I’m Afraid of Everyone,” an everyman trying to balance cynicism, passion, and creeping anxiety with trying to become a better person.

Trouble Will Find Me feels a lot like coming out on the other side of that crucible.  There’s a hard fought acceptance and a sense of giving in, too. This is the first album where the National haven’t become…something greater.  On “Demons” Berninger share dark fears — “When I come into a room/ I do not light it up/ Fuck.” That desperate last utterance, a sense of falling short, of not being the man you wanted to be, is riveting. Trouble Will find Me is wonderfully depressing — an album you settle into with a full handle of scotch. It has no anthems but, in typical National fashion, is loaded with great songs (especially its second half); the reckless elegance of “Graceless,” the stunning piece of songwriting that is “Pink Rabbits”, and “This Is the Last Time” where the only thing more bottomless than the rattling guitar hook is Berninger’s creaking baritone. The National sound at the peak of their powers — not because they’ve conquered life’s vapidity but how they’ve faced it. Berninger promises: “I won’t be vacant anymore.” The beauty is in watching him try.

An extension of its creator, Cerulean Salt is at the same time vulnerable, unflinchingly earnest, and barbed-wire tough. Alison Crutchfield’s acoustic repertoire has expanded to include bruising, electric guitar work-outs (“Waiting” and “Misery Over Dispute”), a real surprise given Waxahatchee’s haunted debut American Weekend was so lo-fi and wispy. Songs like “Brother Brian” and “Lively” shine by convalescing into something sweetly in between — think Built To Spill’s There’s Nothing Wrong With Love. “Swan Dive” might be her best song to date, its gently rolling toms and pretty jangle softening Crutchfield’s cutting admission: “And we will find a way to be lonely any chance we get/ And I’ll keep having dreams about loveless marriage and regret.”

Crutchfield’s competencies as singer and songwriter perfectly complement one another.  Her gravel-scratched tenor can soar, but she’s more comfortable in a lower register, adopting a disaffected, vibrato-less yawn reminiscent of Liz Phair. It suits the thorny, naked subject matter of Waxahatchee’s songs — wounded relationships, restless yearning, and self-deprecation. On “Brother Brian” she nails the discontent of her generation with a succinct, eerie eloquence: “We are only 30% dead/ And our parents go to sleep early/ We destroy all of our esteem/ And the sunlight starts to shine through the trees.”

Crutchfield underscores her songs’ uneasiness with subtle techniques — like letting the last words of her rhyming couplets dangle over the end of the bar like toes over a ten-story building ledge. It commands attention and heightens the suspense in her storytelling — a skill she’s already finely honed with sublime prose and clever turns of phrase (“If you think that I’ll wait forever/ You’re right” she surprises with on “Blue Pt. II”)  Even after you know how each story ends, you hang on her every word. Cerulean Salt’s austerity suggests a purposeful scouring away of all but the essential, reminding you why Crutchfield is so beguiling in the first place — she’s simple, but never plain.

Music built from modulated square waves, percussive attack, and cutoff frequencies isn’t supposed to sound so… well, human. But Settle, the debut LP from UK-born brothers Guy and Howard Lawrence of Disclosure, works on you at a cellular level. First, there’s that impossibly plump, warm-sounding bass tone that’s as recognizable as it is hard to come by (See the fan video “How to Make Disclosure Inspired Bass”). Precision-cut synths are flanked by maracas, hi-hats, and jubilant hand claps. And there’s a superb grasp of composition and melody on display that’s exceedingly rare for electronic artists — none of which is surprising once you learn Guy started playing drums at age 3 and Howard took bass lessons when he turned 6. Now, ages twenty two and nineteen, the brothers are barely allowed into the very same clubs where their exultant fusion of house, pop, and garage sets dance floors ablaze.

In spite of their revolving door of guest singers, Disclosure leave a crisp, undeniable sonic imprint on each song they touch, much like the duo’s trademark stencil transforms every face it’s laid across into an instantly recognizable visage. That list of vocalists is an impeccable snapshot of UK electronic pop’s up-and-comers — Sam Smith, AlunaGeorge, Jessie Ware and London Grammar to name a few — with the latter’s Hannah Reid delivering Settle’s most euphoric moment on closer “Help Me Lose My Mind.”  It transcends the ordinary because Reid, somewhere in the process of losing herself, actually sounds found.

Settle surprises you like a wet kiss in the back of a library — it’s dance music that’s luscious without ever being brainless.  The music video for “Help Me Lose My Mind” was removed by the duo’s record label for a scene in which a pill is reportedly getting passed from one tongue to another. Although the brothers didn’t protest, Guy insists their intent was not to glamorize drug use, and you can almost believe him. In the Year of Molly, Disclosure make music where no chemicals are required for escapism. High or otherwise, you float.

This entry was posted on January 4, 2014 by Jeff Goodwin in Best of and tagged Alison Crutchfield, Cerulean Salt, Danny Brown, Deafheaven, Disclosure, Dream House, Help Me Lose My Mind, London Grammar, Lonely, Old, Settle, Sunbather, Swan Dive, The National, This Is The Last Time, Trouble Will Find Me, Waxahatchee.