This wasn’t supposed to be a eulogy. But before I could finish the review of Blackstar, David Bowie, aged 69, passed away after an 18-month long battle with liver cancer, making this strange and beautiful album his 25th and final one. Amidst the tributes that came pouring in over social media from celebrities, musicians, and everyday fans alike, there was a common habit practiced and perfected in way that only a digitally-obsessed society can manage. We each shared a photo or link to that one David Bowie song or album — “Space Oddity,” “Moonage Daydream,” Low, “Under Pressure” and countless others— that stood out most for us, that represented him best in our own reeling minds. The beauty of Bowie is that there truly isn’t one.

Bowie was the ultimate sound scavenger — picking up styles, tropes and techniques from pop music’s sonic junkyard as he roguishly strolled along, trying on parts for size, appropriating what he liked, tossing the rest. It intensified during the last fifteen years of his career when a neo-classicist Bowie began cherry picking from even his own work, both for better (The Next Day) and worse (Hours). Yet his music transcended every genre it touched. After nearly fifty years of work, Bowie didn’t let critical opinion drive his artistic decisions; he feared becoming stagnant more than making mistakes. Right up until the very end, that self-confidence and unfailing creative compass remained a fundamental part of his brilliance. Improbably yet fittingly, Blackstar remains singular, confounding and magnetic — it doesn’t sound quite like anything else in Bowie’s canon, nor anyone else’s for that matter.

Blackstar’s title track and 10-minute lead single is as challenging as anything Bowie has ever put out for public consumption. Originally conceived as theme music for television series The Last Panthers, Bowie transformed and elongated the piece into an ominous, avant-garde jazz suite marked by a swell of elliptical drum patterns, Middle Eastern scales, cacophonous shards of saxophone, and eerie double-tracked chants through which he speaks of flickering candles, executions, and an impending resurrection. Coupled with a surreal video by Johan Renck that features a blindfolded and button-eyed Bowie, a gem-encrusted astronaut’s skull, and crucified scarecrows, “Blackstar” constructs a visual and aural mythos that’s as captivating as it is inscrutable. Maybe it’s about religious mania, maybe its about Major Tom, maybe its about existential dread; most certainly it’s about the specter of Bowie’s impending demise. There’s a real sense that Bowie’s snatched a glimpse of something unfathomable to human eyes and is rendering it as authentically as he can muster, in his own inimitable way.

The enlistment of saxophonist Donny McCaslin after Bowie watched his 2014 set in a tiny New York City West Village jazz club is a crucial event around which Blackstar orbits. McCaslin’s horn riffs bring neither melodious languor nor swinging cool to the majority of tracks, but ratchets up the record’s unerring tension. On reworked versions of “Sue (Or in a Season Of A Crime)” and “Tis a Pity She Was A Whore,” McCaslin’s saxophone seethes, squawks, flutters and fulminates like a wounded bee — brightly colored, furious, and delivering sting after venomous sting in wide, jagged arcs. The decision to bring McCaslin aboard draws parallels to rapper Kendrick Lamar recruiting jazz virtuoso Kamasi Washington to play on 2015’s rap masterpiece To Pimp A Butterfly (Bowie and co-producer Tony Visconti confessed to listening to a lot of Lamar in the studio). It’s a fascinating thought — two artists forty years and musical world’s apart yet each employing hired horns to lend unsettling, improvisational sparks to their critically acclaimed works.

At a mere seven tracks, Blackstar is slender in stature but remains one of Bowie’s most audacious, outré works, especially cast in sharp relief against 2013’s more conventional pop comeback The Next Day. “Sue (Or In A Season Of A Crime)” skitters and palpitates with drum ‘n bass rhythms and an industrial synth breakdown that’s heavy enough to rattle teeth fillings.  Splashes of blistering sax and anarchic snares propel “Tis A Pity She Was A Whore,” which begins with a lyric that’s a newly minted Bowie classic: “Man, she punched me like a dude.” It’s a playful yet powerful reminder that it isn’t just music and media where Bowie’s blazed trails — he’s challenged societal norms on gender, sexuality and even humanity long before it became fashionable. As a friend of mine so eloquently put it in her tribute, our favorite Martian rock star had a way of making us all feel “OK to be you, whomever you may be.” Bowie relishes in that bold, outsider status on Blackstar, letting his experimental instincts dictate the album’s progressive vibe. It allows the more traditionally emotive songs, like wistful ballad “Dollar Days” and the sad, shimmering pop of “I Can’t Give Everything Away” (whose harmonica hook recalls the lonesome majesty of Low’s “A New Career In A New Town,”) to hit even harder.

In light of Bowie’s demise, you can’t help but re-contextualize everything about Blackstar; the rising-from-the-dead metaphor of “Lazarus,” (whose prescient first line “Look up here, I’m in heaven” acquires even deeper poignancy) and the bodily seizures, occult undertones, and sense of confronting the unknowable that pervades the title track’s creepy imagery. This isn’t revisionist history in the way that Hole’s Live Though This took on prescribed significance when it was released seven days after Kurt Cobain’s unexpected suicide. Bowie knew what was coming; Blackstar was his way of coming to terms with it. Bowie’s closing admission “I can’t give everything away,” is both melancholic and oddly matter-of-fact, especially when delivered over the elegiac curve of McCaslin’s lovely sax notes. Bowie’s desire as an artist to imprint this final piece of his life’s work on our collective psyche is tempered by the knowledge that what he is capable of doing dies with him. As many others have already said in many different ways, there will never be another artist quite like the sly, self-assured Englishman born David Robert Jones. 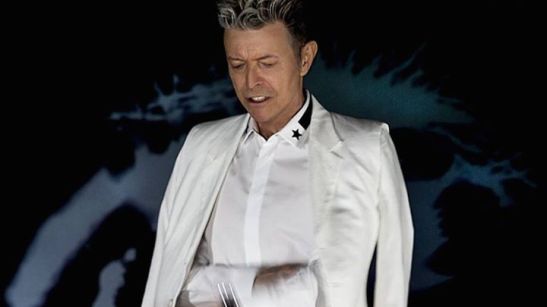 Bowie’s always had a funny relationship with time. He’s stayed ahead of it, kept up with it (both musically and thematically), and understood the inexorability of its passing (from “Changes” to “Ashes to Ashes” to “Where Are We Now?“), yet somehow defied it at every turn. With Blackstar, he rose to that occasion one last rebellious time, practically willing his mind and body to see the album through to its completion and release. That last part is important, I think. Bowie likely drew great pleasure and relief knowing that his final work was heard, and maybe even loved.  Faced with death’s curtain closing on his last act, the earth’s ultimate showman still found a way to make the creation, consumption, and reception of pop music, the most fleeting and fickle of modern art forms, bend to his enduring will.

In an era when high profile musicians pique global curiosity with secret album drops, David Bowie pulled a fast one the likes of which we’ve never seen. He delivered an excellent record, then stunned us just three days later by moving on from this world to the next, a mic drop for the ages. As producer and long-time friend Tony Visconti pointed out: “His death was no different from his life – a work of Art.” In our world, where privacy has become a tattered antiquity, Bowie kept news of his impending death from all but his closest friends and allowed his art speak for him. It’s an astonishing and worthy farewell from a man who’s dictated the terms by which we’ll remember him — not any one song or album of our choosing, but his.

This entry was posted on January 11, 2016 by Jeff Goodwin in David Bowie, Reviews and tagged Blackstar, David Bowie, Dollar Days, Donny McCaslin, I Can't Give Everything Away, Lazarus, Sue (Or In A Season Of A Crime), Tis A Pity She Was A Whore, Tony Visconti.