We live in intolerable times. Radiohead’s songs have been telling us as much for decades: “Everything is broken.” “I’ll take a quiet life/ A handshake of carbon monoxide.” “Women and children first.”  In 2003, when asked by a quixotic interviewer in her twenties if his two year-old son Noah (fittingly named) would be part of the generation that would set humanity’s problems straight, lead singer Thom Yorke replied with absolute certainty that by then it would already be too late. “We have about 20 years left. We can’t wait for him to sort it out.”

It’s nearly thirteen years later, and Radiohead’s ninth album A Moon Shaped Pool echoes that same sense of exigency and creeping disquiet, albeit sounding more restrained and circumspect than the impassioned works of the band’s earlier years. It’s an intricate fusion of rock and classical music elements that exudes worldliness and a pursuit of divinity that is at once inspiring and heartbreaking. The welcome addition of the full string section of the London Contemporary Orchestra  (a fact foreshadowed by last year’s would-be Bond movie theme “Spectre” whose string passages swelled and melted into Yorke’s shivery wail like some disembodied phantasm) makes A Moon Shaped Pool the Oxford quintet’s most thoughtful, labyrinthine album to date and one that takes significant time and patience to digest.

Radiohead’s unerring instinct for applying the best possible arrangements to the best collection of songs they possess at any given moment remains intact on A Moon Shaped Pool, an album that feels cultivated and labored over by a band of wary, grey-bearded soothsayers who sound as if their lives (and perhaps yours) depended upon it. Both deeply personal and planet-sized in its sentiments, A Moon Shaped Pool may not be in quite the same hallowed league as Radiohead’s best albums, but it is among their most meaningful.

In retrospect, I’m not sure how it took so long for Radiohead to embrace the orchestra pit to this degree. The telltale signs have been there all along: guitar virtuoso Jonny Greenwood’s formal classical training as a child, the multi-layered suite-like arrangements he brought to magnum opus OK Computer, the soundtracks Greenwood composed for six films (three from Paul Thomas Anderson alone including 2007’s critically acclaimed There Will Be Blood), the way strings emerged as an integral component in “How To Disappear Completely” and “Reckoner,” two of Radiohead’s most bewitching songs.

NPR program host and concert pianist Christopher O’Riley recognized it back in 2002 when he began transcribing Radiohead songs for piano and playing them to audiences during commercial breaks for his radio show, prompting at least one eager, bewildered listener to inquire: “Who is Mr. Head and where can we get more of his beautiful music?” O’Riley went on to release two albums of piano-only Radiohead covers to popular acclaim among the band’s fans and classical music aficionados alike, who appreciated the music’s symphonic progression, the frequently contrapuntal relationship of Yorke’s and Greenwood’s melodic leads, and the band’s love for atypical time signatures.

On A Moon Shaped Pool, the similarities to classical music extend well beyond technique to the band’s musical ethos. Radiohead’s ability to assimilate and reinterpret a bevy of influences (rock, electronica, folk, pop) without ever sounding like a regurgitation is readily apparent on these eleven tracks, many of which don’t quite fit into any of the above categories. To borrow another concept from classical music circles, everything on A Moon Shaped Pool is written in order to serve to the needs of the piece. 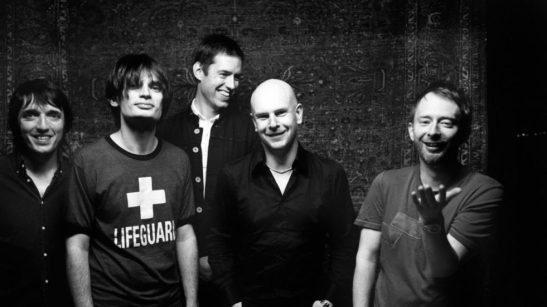 At the first sign of stabbing orchestra strings and a gurgling synth drone, paranoia settles over opening track “Burn the Witch” like a low-grade fever. The song’s accompanying stop-motion video is an unnerving homage to both highbrow cult horror film “The Wickerman” and late-60’s animated children’s series Trumpton that culminates with a townspeople’s ritualistic sacrifice of an outsider as Yorke’s eerie falsetto and Greenwood’s strings crescendo in unison.

It’s a heady sonic contrast of old and new, of the provincial and the universal— employing quintessentially British cultural staples to cast light upon the disturbing wave of anti-immigrant hysteria sweeping over much of the world’s geo-political landscape. “Abandon all reason/ Avoid all eye contact” Yorke warns. “Shoot the messengers.”  The irony in that lyric is not lost; Radiohead’s music and progressive messages capture the zeitgeist found at the intersection of artistic authenticity and political discontent in 2016. To many, they are the messenger. In true Radiohead fashion, everything sounds gorgeously in its right place, yet all is most definitely not well.

Follow-up “Daydreaming” is wobbly, woozy and slightly surreal — a haunting ballad whose halcyon electronics, piano, and strings lend elegiac urgency to Yorke’s missives on environmental destruction. In the PT Anderson-directed video, the haggard singer meanders through a maze of man-made structures — houses, hospitals, parking garages, laundromats — strung together as if connected by magic doors (push/pulk, anyone?). “It’s too late, the damage is done” Yorke moans inside the walls. “This goes beyond me/ Beyond you.” Only when those doors lead outside — to an idyllic forest, a radiant beach, majestic snow-capped mountains — does the tempo quicken and the song’s melody find a purpose. The video ends with Yorke curled around a campfire in the depths of some primal, ice-encrusted cave, shivering but sheltered, no longer afraid. The image is subtle but the message evident: we are lost within glass and concrete, yet at home in the wilderness.

“Daydreaming’s” ephemeral sound and Anderson’s sumptuous 35mm shots conspire to create an atmosphere of waking reverie, one where the Yorke’s activism on climate change is rendered as powerfully and poetically as if you had dreamed it yourself.  “We are of the earth/ To her we do atone/ The future is inside us/ It’s not somewhere else.” Yorke professes on “The Numbers,” a rich folk ballad draped in decaying tape loops, fluttering keys, and a chattering sea of voices that ultimately transforms into a classic protest song. “We call upon the people/ People have this power…Take back what is ours” intones Yorke as Greenwood’s string section thrusts to the fore, elevating the plea from pedestrian to majestic. Yorke once claimed he’d never write a song about global warming out of fear of it sounding maudlin, but “The Numbers” is as close to a populist anthem as he’s ever come. 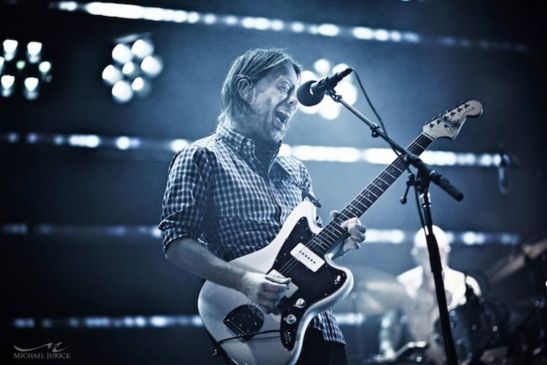 One of A Moon Shaped Pool’s greatest triumphs is that of scale — the way anxiety over the earth’s crises so seamlessly mirrors Yorke’s private doubts and fears. Most of A Moon Shaped Pool’s songs were written a few years ago, but that doesn’t stop them from striking emotional nerves Yorke laid bare in late 2015 when he and Rachel Owen, the mother of his children, separated after two decades together.  On two of the album’s most intimate tracks “Desert Island Disk” and “Glass Eyes”, he oscillates between crippling indecision (“Hey it’s me/ I just got off the train/ Should I turn around?/ Buy another ticket/ Panic is coming on strong/ So cold, from the inside out”) to profound liberation: (“Now as I go upon my way/The wind rushing round my open heart/ An open ravine/ Totally alive/ Totally released.”) We may never know Yorke’s whole truth, save that he is deeply affected by the event. At the end of “Daydreaming,” the 47-year old singer repeatedly utters “Half of my life” (he was with Owen for 23 years) although even that phrase is detectable only when playing the track backwards and sped up. Even Yorke’s disclosures come shrouded in a veil of secrecy.

Over the past 25 years, just as Radiohead’s signature explorations of disillusionment and emotional paralysis have scaled up from the personal (“Creep” and “Fake Plastic Trees”) to the societal (“No Surprises” and “2+2=5”) without losing any of their immediacy, the band’s sonic palette has simultaneously diversified and folded back in on itself. A Moon Shaped Pool teems with these tiny sonic ripples that extend back toward past works; the way Colin Greenwood’s serpentine bass line manifests inside the second verse of “Burn the Witch” so stealthily you scarcely notice it (like “15 Step”), the way a choir of unholy voices rises up to adorn “Dark Decks” as spaceships blot out an apocalyptic sky (see “Paranoid Android”), and how the jazzy motorik dread of “Ful Stop” splits the difference between “Idioteque” and “Morning Bell.” Yorke’s brilliantly cryptic accusation “You really messed up everything” (again, is he talking to society or himself?) almost feels comforting in its dystopian familiarity. And it’s going to sound fucking fantastic played at ear-splitting volume on Radiohead’s summer festival circuit.

For hardcore fans, a subtle pleasure experienced on the day of a new Radiohead album release now involves reading the track list and recognizing previously heard and road-tested songs, then diligently listening to discover all the new twists, turns, and embellishments the band has built in to the studio versions. Songs that once felt meandering now demand your attention; songs with strong bones become magnificent. A Moon Shaped Pool’s closer “True Love Waits” has been a fan favorite in live concerts for two decades but has never seen the light of day as a studio recording. Until now. The song absolutely shines, having finally received the arrangement it deserves — a spartan piano figure with twinkling counterparts whose starkness transforms the chorus into a desperate plea: “Just don’t leave/ Don’t leave.” This simple request, sung over one of the prettiest melodies Yorke has ever penned, is made all the more devastating by the knowledge that it was intended for a lover who is no longer there.

With the surfacing of “True Love Waits,” and the reemergence of so many familiar musical motifs, it’s tempting to claim that A Moon Shaped Pool is Radiohead come full circle, but the arc of the band’s  journey feels more concentric in nature. Radiohead continues to spiral outward, revisiting old spaces and fighting the same battles but forever expanding beyond their comfort zones and our expectations. It’s a remarkable trajectory unlike anything we’ve seen in music for a very long time.

Unlike most of their pop music contemporaries, Radiohead offer up little to no escapism in their work, only commiseration and the assurance that humans (five of them, anyway) can retain sanity and integrity in the face of unbearable pressures and threats — xenophobia, climate change, economic collapse, terrorism, diminishing natural resources — that are all quite real.  It’s up to each individual to take these songs and do what they like with them, to consider what A Moon Shaped Pool means to them and what it means to live in the 21st century, to overcome their own denial and disaffection with the current state of things, to decide to put an end to intolerable times. Those twenty years Yorke spoke about are almost up.

In that same 2003 interview, Yorke said: “I really have a problem with people who dismiss our music on the grounds that it’s depressing, because a lot of creative power is from that feeling.” Radiohead codify the pathology of the distressed — that mixture of unabating fear, grudging acknowledgement of the circumstance, and, ultimately, resistance. Their reinvention and continued relevance represents not just a need to survive but a desire to transcend, to be the best version of themselves, in this case a band that stirs, uplifts, informs, and (hopefully) galvanizes people to action. At one point on A Moon Shaped Pool, Yorke recognizes the crushing weight of the undertaking and makes a counteroffer. “Don’t get heavy/ Keep it light and/ Keep it moving.” As if such a thing were possible. He keeps returning to the music — “This dance/ It’s like a weapon/ Of self defense/ Against the present tense” — the thing that keeps him going, and so, in turn, do I.

This entry was posted on May 10, 2016 by Jeff Goodwin in Radiohead, Reviews and tagged A Moon Shaped Pool, Burn The Witch, Daydreaming, Jonny Greenwood, The Numbers, thom yorke, True Love Waits.